Some of the more interesting (and not so interesting) sequels that the B-Movie Gods have bestowed upon us.

And coming soon from a Theater near you...

"Everyone likes to kill Nazis, even God--check out the end of Raiders of the Lost Ark, if you don't believe us."
--Steve Johnson and Leighton Connor, QAGS Second Edition

The Zombie Lake trailer is Not Safe For Work. It's a Franco film, and that means some full frontal nudity.

Have a great Monday!
Posted by Mike David Jr. at 4:54 PM No comments:

Here is one of the first characters I’ve made with the random character creation rules from the Icons RPG. 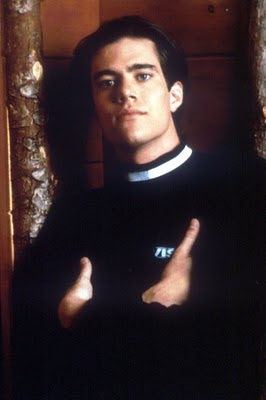 Gavin Rogers IV
Origin: Trained
Prowess 5
Coordination 6
Strength 5
Intellect 5
Awareness 5
Willpower 6
Stamina 11
Determination 4
Powers
Blast Device 5 (Enchanted Arabesque)
Force Field Device 5 (Ring of Protection)
Specialties
Military
Martial Arts-Expert
Investigation
Occultism
Qualities
Challenger of the Uncanny!
Identity: World Traveler
Motivation: Help Others in Strange Situations
Connections: Friends of His Cousins
Challenges
Enemy: Simon Rogers, Cousin and Archfiend
Family, The Ties That Bind
Public Identity
Gavin Rogers was a former soldier who returned to the family manor when his Grand Uncle Griffin died under mysterious circumstances. All of his cousins were there including his cousin Simon. As part of his inheritance, each cousin was given a chest, which Simon attempted to buy each chest for a ridiculous amount. All of them refused, and Simon left the Family Manse unhappy.
Gavin soon discovered that the chest contained a gun and a ring collected by his great grandfather Gavin. Gavin Rogers Sr. was a veteran of the Morlock War [1], and the artifacts were the foci and gadgets of fallen friends and allies. What Gavin Sr. could not return to the proper holders, he put aside until the time was right for such items to be wielded again. A separate note was from Great Uncle Griffin, who asked Gavin to keep an eye on the other children, as he was the oldest. They would be given more powerful items, but Griffin was sure that Gavin would make due with the tools at hand.
Forgoing a secret identity, Gavin has thrown himself into helping others found in strange situations. Since gaining the strange gun and the ring, Gavin has fought mutants, vampires, and the beginnings of a revived Morlock Empire. His most persistent foe is his cousin Simon, a jealous man who wants all of the collected artifacts for his own nefarious purposes.
[1] The Morlock War was a series of battles that involved a multiple Earth spanning Morlock Empire and an army led by the legendary Time Traveler. The War spilled onto several parallel earths before it was finally resolved with the destruction of the Morlock Throneworld via Timestorm in 1985 (our time).
Posted by Mike David Jr. at 4:34 PM No comments:

In my misspent youth I watched a lot of movies, especially during the winter. One of my favorite things to watch were the Amicus anthology movies from the 70s. Britain's other horror film factory made anthology films based off of the works of Robert Bloch, R. Chetwynd-Hayes, EC Comics, and others. Filled with familiar faces, these movies are a great way to enjoy some classic British Horror.


Check on the Amazing RPG Fun Pad for another B-Movie Monday!
Posted by Mike David Jr. at 5:44 PM 2 comments:

d20 Aetherspace: A steampunk/fantasy space/Greek myth setting for 3.5 D&D or d20 Modern setting in a fully inhabited Solar System. He has Kangaroo Men in this one, people!
Voidspanners: A fantasy space supplement for the Basic Fantasy RPG (a Basic D&D Retro) by Luigi Castellani (Under the Moons of Zoon, Mazes & Minotaurs artist). Having a Spelljammer feel, there's good stuff to steal here.
The Brothers Brick: Pages upon pages of Lego creation from the Amazing to the Surreal. Some truly great work here.
Freedom in the Galaxy on BoardGame Geek: The entry on one of the games I always wanted as a child, Avalon Hill's Star Wars-esque Freedom in the Galaxy board game.
Paranormal Romance Generator: When you need some ideas for your next Urban Fantasy campaign.
Posted by Mike David Jr. at 4:42 PM No comments:

In dedication to the airing of Princess of Mars on SyFy last, B-Movie Monday celebrates the masters of the mockbusters: The Asylum. Made on a major movie catering budget, designed to cash in on recent blockbusters, the following trailers may look a "little" familiar...


One of the things I like about the Asylum is that they realise they are making movies to make money, and make no apologies for it. This cheerful defiance makes reading their website at theasylum.cc rather amusing. My favorite quote on the site regards people who complain about Asylum movies that are gotten for "free":

Look, I’m not trying to end internet piracy, but I think there should be a new rule: If you illegally download a movie, you forfeit the right to go online and talk shit about it.

And I’m not saying you have to like our movies. But if you got something for free don’t complain about it.

That right belongs to the people who actually paid money to watch the crap we make.

Now, they have something to complain about…

And on that note, join me every Monday for B-Movie Monday!
Posted by Mike David Jr. at 2:31 PM 1 comment:

[B-Movie RPG] Two Characters from Fulci's The Beyond (for Unisystem)

I love cheesy 70s-90s horror movies. Although there is usually no logic or reason to these films, but there are plenty of characters, monsters, and situations to steal for gaming. So when I get some gumption out, I think I'll stat some of these things utilizing various RPG systems. This originally was posted on the Eden Studios Message Board for the Angel RPG in The 80's Rule post
***
I love threads like this. My first additions to this thread are two characters from the Lucio Fulci movie The Beyond. Or shall we say, the Buffyverse/Swinging Seventies/Heroes of the Millennium versions of these characters. There are mild spoilers, so be warned.
The Seven Doors Hotel Affair
There are areas in this world where the barriers between dimensions are not as strong as we believe. In the best of times these areas have a reputation for strange noises and unusual sightings. Sometimes the barriers grow thin enough to allow close hell dimensions to bleed into our own. Rituals and spells work far easier in such places, and blood shed in such a place can lead to unwanted gates opened. Soon they gain a reputation for being accursed. Some are even said to be entrances or gates to Hell.
At the turn of the century the Seven Doors Hotel was built over such a place. Formerly the land was deep in the swamps, but soon the land was drained and used for building. Strange occurrences soon began to happen there in the new hotel. In the late 20s, an artist named Schweick visited the hotel with a strange tome called The Book of Eibon. He disappeared several months later, after an incident that resulted a fire that destroyed a third of the building. Fifteen locals and the remaining guests of the hotel also perished, their remains never recovered.
Other strange incidents continued to plague the Seven Doors Hotel in the decades that followed. It went through several owners until Elizabeth Merill inherited it in the summer of 1981. This was when the disappearance of an artist named Schweick and the reading of the Book of Eibon led to the opening of one of the so called Seven Gates of Hell.

Liza Merill
played by Catriona MacColl
Elizabeth Merill inherited the Seven Doors Hotel on the fall of 1981. This came after failures in several other arenas, including and model, dancer, and fashion designer. Her plans for renovating and reopening the hotel came to a halt when a desiccated corpse was discovered in the basement. This discovery began a chain of events that led to the opening of one of the mythical Seven Gateways of Hell.
Liza is a bright, beautiful woman who just wants to find a place in the world to call her own. She is by nature a nervous woman, that situation not helped by her apparent lack of luck, and an increasing tie to the world of the supernatural.
Name: Liza Merill
Motivation: To have a normal, peaceful life
Critter Type: Human
Attributes: Str 2, Dex 2, Con 2, Int 3, Per 2, Will 3
Ability Scores: Muscle 10, Combat 10, Brains 11,
Life Points: 29
Drama Points: 10
Special Abilities: Attractiveness +3, Hard to Kill 1, Bad Luck 2, Emotional Problems (Fear of rejection, easily flustered), Psychic Visions.
Maneuvers
Name;Score;Damage;Notes
Dodge;10;None; Avoid getting hit
Knife;10;4;Slash/stab
Kick;9;6;Bash
Punch;10;4;Bash
John McCabe
played by David Warbeck
Jonathon McCabe left England for unspecified reasons and settled in New Orleans during the mid-70s. He came to be the chief surgeon of a small hospital when he met Liza Merill in 1981. Soon he was drawn into the strange incidents surrounding the Seven Doors Hotel.
John has a good bedside manner, but has a tendency to be incredibly blunt. The brusqueness turns to anger when he thinks he his being lied to. He wants nothing to do with the world of the supernatural, but is slowly finding himself forced into it beyond his control.
Name: John McCabe
Motivation: Find a rational explanation for things, the hippocratic oath
Critter Type: Human
Attributes: Str 3, Dex 3, Con 3, Int 3, Per 4, Will 3
Ability Scores: Muscle 12, Combat 12, Brains 12,
Life Points: 34
Drama Points: 10
Special Abilities: Fast Reaction Time, Nerves of Steel, Attractiveness +1, Mental Problems (Mild delusion (there's always a rational explanation), mild recklessness), Honorable (mild), +4 to Brains for Doctor, +3 to Combat for Gun-Fu.
Maneuvers
Name;Score;Damage;Notes
Punch; 12;6;Bash
Dodge; 12;None;Avoid getting hit
Scapel;12;4;Slash/stab
Pistol;15;12;Bullet
Brain Shot;8(11)*;varies by attack;Bash doubled, Slash/stab tripled, Bullet quadrupled
Grapple;14;None;Resisted by Dodge
*Including the +3 to Combat for Gun-Fu.
With luck I'll have more characters including Peter West from Zombie and the good doctor from the House by the Cemetery.
Peace out,
Madavid13
Posted by Mike David Jr. at 3:22 PM No comments: