Easily the best documentary I've watched this year (Not Safe For Work):

And for those of us who remember the VHS days...

I went and saw Predators yesterday and thought it was an excellent movie. I got $7.50 worth of entertainment. Since it's late and I have to go to bed soon (Sunday was a busy day and I had to work today), I got some Predator trailers (the three movies and some fan films) for you. I consider fan films a viable part of the B-Movie experience, and some of them are more fun than the official movies that Hollywood puts out.

I'm Mike David and I approve this message!
Posted by Mike David Jr. at 9:48 PM 1 comment:

I give you...
Bonelord
Clinton Darner 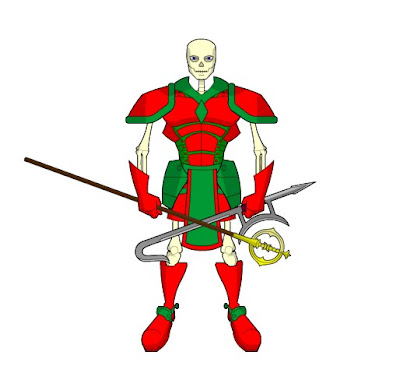 Qualities
Catchphrase : "With [insert item name here], I will have all I desire!"
Epithet : The Skeletal Sorceror
Well Placed Investiments

Point Total 49
Bonelord looks like a walking, talking skeleton encased in a gaudy but effective suit of red and green armor. He always carries magical items of varying degrees of power. Despite not having any lungs, Bonelord still sounds like a normal human being.

Bonelord claims to be Clinton Darner, a rich amateur occultist who accidentally summoned a demon of flaying instead of a hyperactive succubus like he wanted. The occultist escaped his imprisonment in Hell, but could not regain his original body, just his bones. Most of the mystic community believes this story. Bonelord has two reputations: he is extremely clever, but his also one of the unluckiest supervillains on Earth.

A typical Bonelord plan usually involves gaining an artifact that can augment his meager magical skills and give him access to undreamt of magical ability. Procuring the artifact is usually no problem for Bonelord; controlling it is another matter. If an item will open up a gate to the Pure Heavens, an angry Archangel will send down some Seraphim to cleanse the North American continent. If one of the Lost Pages of the Necronomicon will raise “an army of bone”, Bonelord will summon some marrow eaters instead. Anything that can go wrong usually does around this villain. Even other weirdness magnets marvel at the bizarre ways that reality conspires to stop whatever he attempts to accomplish.

B-Movie Monday: We Found This Video...

This week we celebrate that subgenre of B-Movie that was made popular by The Blair Witch Project and Cannibal Holocaust. Just hope you never find these videos while you're walking around...

And the website dedicated to the grandaddy of this genre of horror movie (Not Safe for Work or for weak stomachs or kids) It's Cannibal Holocaust!:

Hope you enjoy your Monday!
Posted by Mike David Jr. at 4:04 PM No comments:

Everyone have a great Independence Day!
And now, American Trilogy by Elvis Presley.