Just a quick Risus character for today. Take some weird dinosaur theories and add a twist of Valiant's version of Turok, Son of Stone and you get...
Dirk Bogart, Diablosaur Hunter

Dirk Bogart is the first Diablosaur Hunter. Once Dirk was a forest ranger until he stumbled onto a dimensional rift deep in Central Wisconsin. A gaping hole in an ancient burial mound opened into , the hideous realm of the Diablosaurs. At first Dirk used his wits, artifacts from the mound, and a smattering of occult knowledge from his grandmother, Dirk soon was able to get a hold of some technomantic weaponry to aid in his attempts to stop the Diablosaur invasion. His was a lonely battle until survivors of Diablosaur attacks began to her stories of a lone hunter foiling unholy plots. Other groups began to hunt the demonic dinosaurs and Dirk found himself a reluctant mentor to a new generation of Diablosaur Hunters. Most of the time you can find him deep in the woods hunting alone.

Grizzled Diablosaur Hunter [5d8]
Conversationalist Ex-Forest Ranger [4]
Reluctant Mentor To The Next Generation (3)
Grandson of A Wise Woman (3)
Bonus Item: Betsy: Technomantic Diablosaur Hunting Rifle (4)
Questing Dice (Destroy The Diablosaurs): [][][][][]
Hook: Guilt Complex. Dirk has always been a loner, dealing with people only when he has to, This tendency towards being a loner was only intensified by the hunt he finds himself in. Deep down Dirk is afraid that every death caused by Diablosaurs is his responsibility. He avoids crowds whenever possible, and keeps conversation to a minimum. This can hinder him in his Diablosaur hunting activities, even when he finds allies to his cause.
The Diablosaurs were inspired by this article.
Turok (Valiant era) on Wikipedia.
Posted by Mike David Jr. at 12:08 AM 3 comments:

From the 70s I give you Filmation live-action through the wonders of YouTube! Here are two episodes of The Secret of Isis. Dig the 70s computer in the beginning of the first episode! 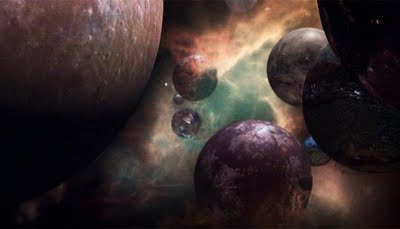 The 27 planets stolen by Davros and the Daleks in the Doctor Who Episodes "The Stolen Earth/Journey's End".
How about this for a science fantasy campaign, inspired by the 4th season of Doctor Who, Spelljammer, and the Savage Worlds setting Slipstream:
A cosmic being steals random worlds from across the Multiverse for an unknown purpose. The being places the planets in a pocket dimension bordered by various dimensions. The worlds orbit each other in a complex pattern, and the dimension seems to light and darken to give the impressions of day and night. With that, the cosmic being disappears.
After the initial chaos of the Stealing, the denizens of the various planet go out to meet each other. Alliances are made, battles are fought, and conspiracies are begun. World that have not contacted the other planets are marked for exploration. Travel between the planets is made possible by ships powered by science, magic, psionics, and other motive forces. And the greatest question of all is the mystery of why the planets were taken in the first place.
Take a bunch of worlds you always wanted to have interact with each other and throw them in the mix. May do something with this in the future...
Posted by Mike David Jr. at 6:07 PM 1 comment:

With all of the recent back and forth in the OSR and beyond, you internet pal Mike has decided that we need a little break from all of the chaos. I give you Hypno Rick Springfield... 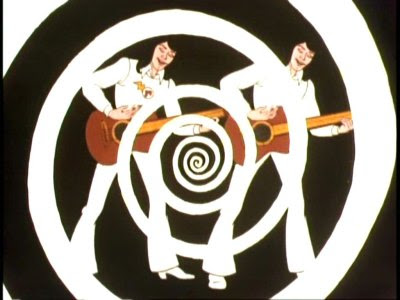 --IN STEREO!
A hypnotic scene from Mission: Magic, a lesser known Filmation effort from 1973. It featured Rick Springfield aiding teacher Miss Tickle and her students. Both Rick Springfield and Miss Tickle were magicians, and they went on 16 weird adventures in time and space. It's kind of weird in a trippy 70s way. Check the wikipedia entry here for more info.
Posted by Mike David Jr. at 8:54 PM No comments:

Art from The Horn of Roland, A Lords of Creation Adventure 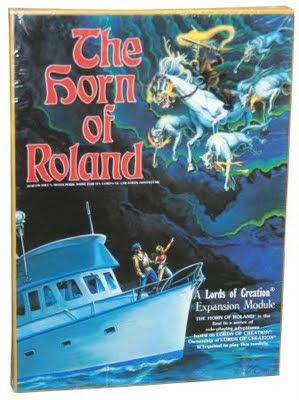 Here's a several scans of art from The Horn of Roland, the first adventure for Lords of Creation. They were drawn once again by Dave Billman. Soak in the mad science fantasy goodness! 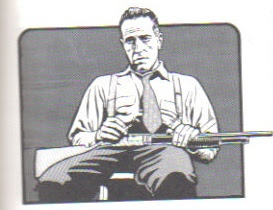 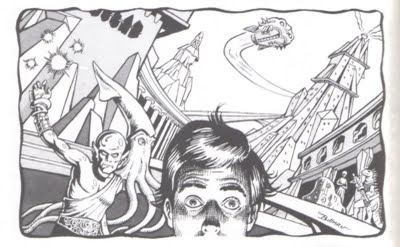 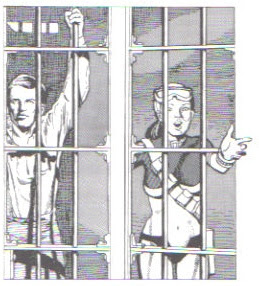 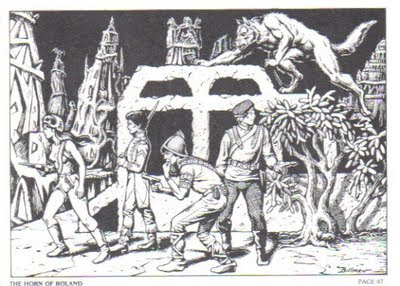 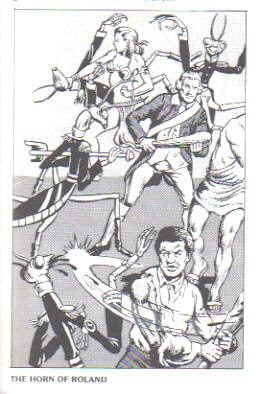 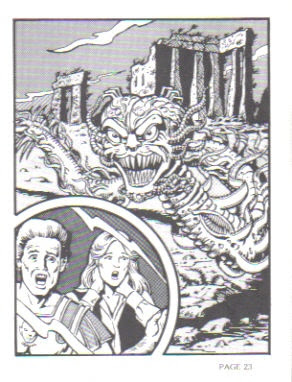 Here's a character for John Stater's superhero RPG Mystery Men! (More info for the game at his Land Of Nod blog.) Old Town is a neighborhood in Shore City, the sample setting created for the game. But feel free to use him in any run down neighborhood that could use a little hope. 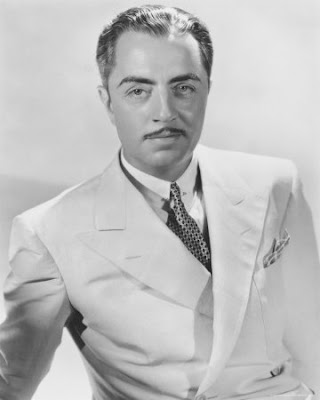 Mr. Samuel Weir has always lived at the Belvedere Hotel, 13th Floor, 13th Room. Even long time employees can't remember a time when he didn't. Urbane and witty, Mr. Weir is a well known fixture of Old Town. One can find him taking him taking in a cabaret featuring the soulful singing of Dena Aveltine, or laughingly shooing away the Down 'n Out Kids as they run down the street. A smile always plays across his face as he walks through out the neighborhood.

The criminals of Old Town tell darker stories, of when Mr. Weir's smile goes away. They tell of strange things and strange events that plague those who take too much away from the hard working folk of Old Town. They also tell of Mr. Weir dealing with horrors that even hardened gangsters are afraid to tangle with. Some even say that when Shore City is invaded by outside forces, Mr. Weir stands alongside its heroes to fight the darkness.

Like his younger brother famed doctor (and wielder of the Purple Claw) Dr Johnathan Weir, Samuel Weir has been touched by the supernatural. Mr. Weir has chosen to remain in Old Town and protect the neighborhood from threats supernatural and supernormal. While he knows that he alone cannot stop the decay that is gripping Old Town, he can at least help those who are trying to help themselves.

Flaws: Regenerate only works within the borders of Old Town. Sorcery cannot be used to directly damage another character. For example, Mr. Weir cannot cast Call Lighting to fry a drug dealer. He could cast Mirage to cause the drug dealer to swerve and crash into an abandoned building.

Notes: Dr. Johnathan Weir and the Purple Claw were created by an unknown writer and artists Ben Brown and David Gantz. Both are believed to be in the public domain, and are used as such.

A Snapshot From Vanth 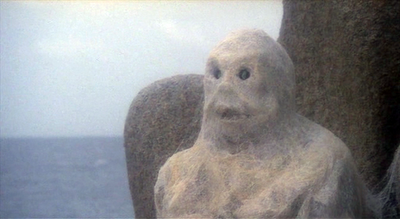 A rare aboveground picture of a Wooky Lich, Undead Scions of Forgotten Icful. This was taken amongst the blasted landscape of the Forbidden Wastes. Their bone white fur clings to them as they glide through the Wooky Necropolises keeping a constant watch on their sleeping brethern. Although the Wookie Liches seem wizened and dessicated, they can still rip a klengon apart limb from limb. The Tomb Robber Guilds have tried to have them exterminated, but no one has collected any reward as of yet.
Posted by Mike David Jr. at 9:48 PM No comments: 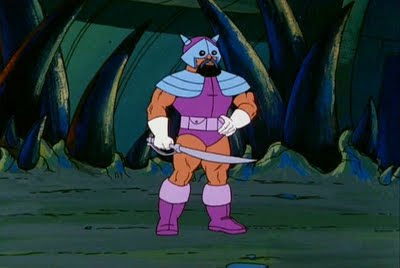 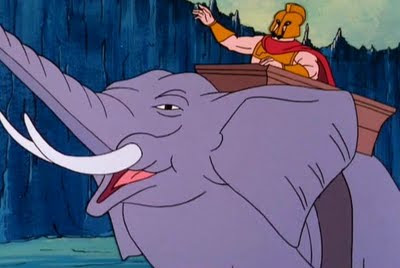 and Hannibal of Carthage
from "Castle of Heroes", an episode of He-Man and the Masters of the Universe. This episode is a truly bizarre one. An old friend of Skeletor wants to add He-Man to his army of powerful and/or evil warriors from throughout the universe. I get Hannibal from the elephant, but Blackbeard in the lavender armor and polarized lenses is kinda weird. In fact, the entire episode watches like an adventure for Tom Moldvay's Lords of Creation that got animated.
Oh what the hey, check out the episode:

From the late night programming of the local evangelical christian channel I give one of my favorite TV show theme songs: the opening theme to the Pagan Invasion!

According to the makers of the Pagan Invasion this show:

It's as fun as it sounds.

I don't paint or craft miniatures, but Khurasan Miniatures puts out some of the sharpest 15mm to 28mm miniatures out there. They are visually inspiring, and the background fluff they provide is entertaining too. Check out the fine miniatures of Khurasan here. 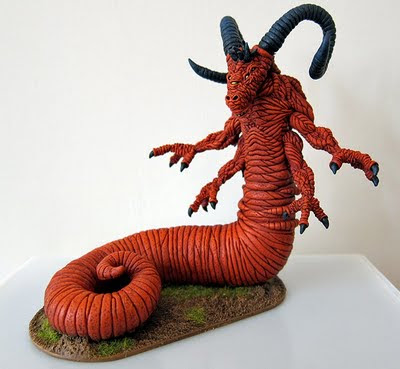 The monstrous Great Ba-He-Mot
The Khurasan Miniatures blog has previews of upcomind releases and some excellent background for their various figure lines. 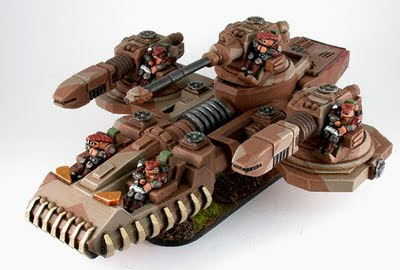