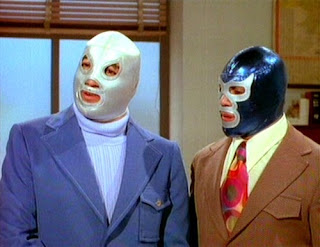 Because Luchadors in Suits Makes Sense in A B-Movie World
Posted by Mike David Jr. at 3:32 PM No comments:

This Is The Way I Want To Summon My Spirit Animal!

From The Aquabats Super Show:


Here's another Space Princess character for you. I used the Psychic class from the Space Princess rules for this one, but I changed the details of his gear to reflect a more "witchfinder" feel for the character. Why Is He Going To The Space Fortress? is a little something to explain why this character is going up against the Dark Lord to find the Space Princess. 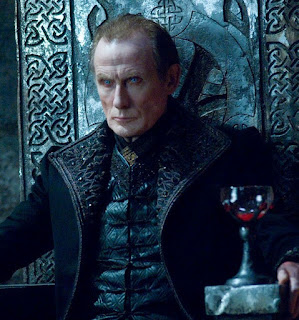 Magistrate Nizraks Mercy is not an ordinary adventurer you would find plying his trade across the galaxy. He is one of the oldest living members of an ancient psychic order.  The Magistrates are psychics trained to that hunt down the strange Unbound Psychic Entities that seem to plague the Reevian Kritarchy and to stop them from wreaking havoc across their system.  Magistrates exist alongside the Orders of Law, able to overrule Continental Judges in pursuit of their goals. This power is tempered by a strict code of honor (enforced by various means) against abuse of their powers.

While Nizraks can come off as humorless and cruel, he takes no particular joy in his actions. He is a simple, honest man who has given up a more normal life to protect his people from enemies they cannot see until it is too late.

Why Is He Going To The Space Fortress?


The film was released in the United States in 1962 in an English-dubbed and modified form by Roger Corman's Filmgroup under the title The Magic Voyage of Sinbad (the original version of the film does have a slight connection to Sindbad the Sailor since Rimsky-Korsakov's symphonic suite Scheherazade incorporates elements of Sindbad stories). The Magic Voyage of Sinbad retains the basic plot structure of Sadko but includes several significant changes: the total running time is reduced from approximately 85 to 79 minutes (most of the deleted footage consists of scenes in which songs are performed), voice-over narration is added, the protagonist "Sadko" is renamed "Sinbad," and characters and places are renamed to disguise the film's Russian origin and transform the film into a story about Sindbad the Sailor (perhaps most significantly, the city of Novgorod is renamed "Copasand"). Also, the English dubbing in this version arguably gives the film a slightly "campier" tone than the original version, in which the dialogue has a more polished and "literate" tone. Notably, the "Script Adaptor" for this version of the film was a young Francis Ford Coppola.

This version of the film was featured in Season 5, Episode #505 of Mystery Science Theater 3000 in 1992. Despite mocking this modified version of the film in this episode, Kevin Murphy, voice of Tom Servo, has professed a love for the "breathtaking" visual style of this and other films by Aleksandr Ptushko in multiple interviews.[1][2] Paul Chaplin, another writer of the show, has also expressed admiration.


For this Monday I give you this amazing fantastasy movie hybrid. I hope you enjoy.

The possessing entity who assumed the mantle of Andre von Darke was once a good man seduced by power and survival. A minor baron dying of a strange disease, he began to dabble in strange and arcane magics ultimately learning how to take over another’s body. Before Von Darke could take over the Kingdom of Slivonia by possessing the king he was bound into the Cube of Shadows, a spirit prison. When the Cube was split in the 1990s, Baron von Darke escaped the Cube with the other prisoners, and remains free to this day.

When not in a body, Baron von Darke appears as a handsome man in nobleman’s clothes. the Baron cannot influence the physical world directly, but he can still talk to people. His brown hair and beard are short and neatly trimmed. He usually has a friendly smile which turns quickly to rage when he is thwarted. When the Baron is possessing someone, their eyes glow red when angry or using magical ability.

Trapped in Spirit Form: Baron von Darke cannot physically affect the real world unless possessing someone and he has a susceptibility to exorcisms and banishments.


I've never backed a Kickstarter for anything, RPG related or otherwise. But when I heard from the Risus Monkey that diabolical Risus Guru S. John Ross was doing one for a Free Adventure Project, I was intrigued. Long story short, I decided to throw in some funds to back this project to spread the love of Risus, my favorite free rpg ever.  As of today the Kickstarter is funded over 300% of the $500 original goal. That's some Risus love!

If you're a Risus fan you've probably seen the information about the RISUS Free Adventure Project 2012. If not check out the information page here!
Posted by Mike David Jr. at 7:26 PM No comments: 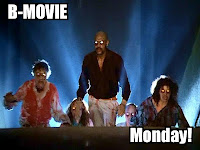 Here are some B-Movie celebrating artworks from some of the fine artists on DeviantART!

And this one isn't from a b-movie but it is too fricking awesome to pass up:


Cereal Monsters by ~jasonedmiston on deviantART

Have a good Monday!
Posted by Mike David Jr. at 5:36 PM No comments: