I May Have To Write Some Toon RPG Stuff 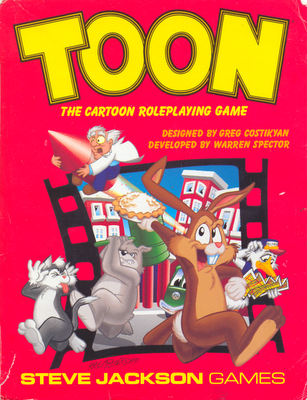 IMHO there's not enough material for the Toon game by Steve Jackson Games on the Net. I think I may have to do a little something about that.
Just something to light a little fire under myself.
Posted by Mike David Jr. at 4:53 PM 3 comments:

I was whiling away a Sunday afternoon tooling around the web so I wouldn't fall asleep in the chair. I hadn't been on Deviantart in a while so I went their and started looking around. Put in Fulci in the search engine I stumbled on this... 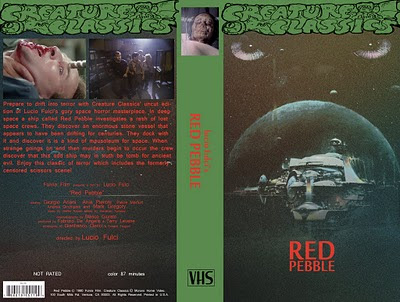 It's a mock-up for a VHS cover for a fake Lucio Fulci movie called Red Pebble. By the summary on the back back I would have loved the movie that could have been. I thought this was inspired so I took a look at leothefox's deviantART gallery and found these goodies. 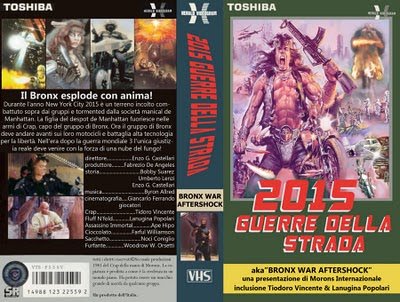 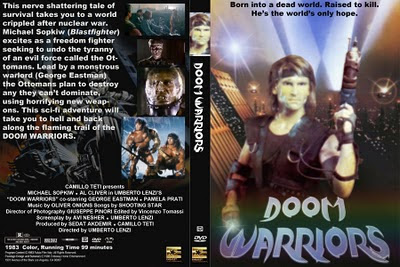 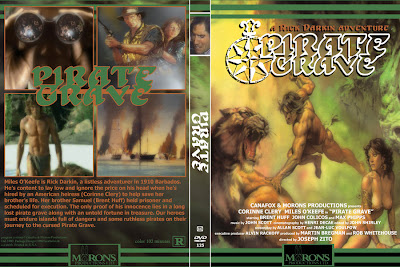 These fake covers are great. The art, titles, and back cover blurbs capture that 80s corner store video feel I love. Plus, these covers give me some RPG ideas as well.
Leothefox has a lot of fun stuff in the gallery. Check it out at leothefox's deviantART site!
Posted by Mike David Jr. at 2:45 PM 1 comment: 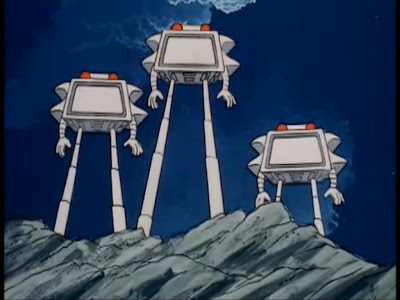 The Space Giants tower over the cliffs in "Space Giants", an episode of Space Sentinels (1978).
Watch "Space Giants" on YouTube.
Posted by Mike David Jr. at 5:52 PM No comments: 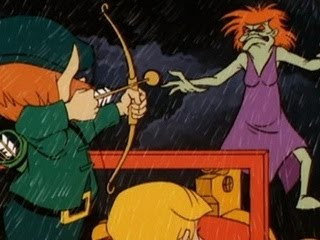 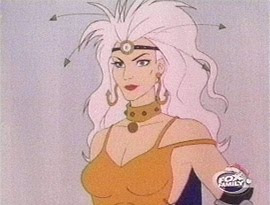 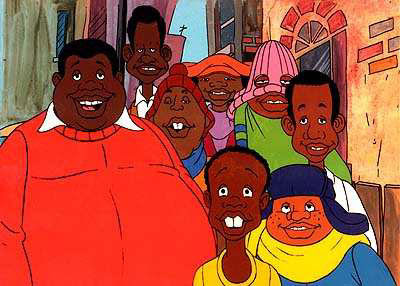 After the little skirmishes in the RPG blogosphere and the craziness in my home state Wisconsin, I think we all need a little Fat Albert to make us smile for a bit.

Hot Elf Chick Welcomes You To The OSR 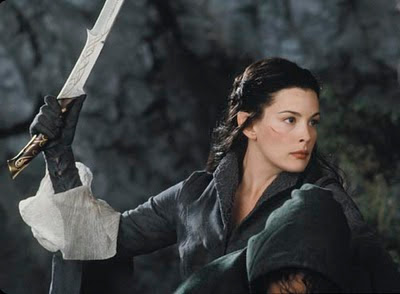 Arwen. She's hot, she has a cool sword, and she pimped the Nazgul. 'Nuff said.
Just jumping on the meme.
Posted by Mike David Jr. at 8:17 PM No comments:

I Think I'm Going To Rent Piranha Man vs. Wolf Man: Howl of the Piranha 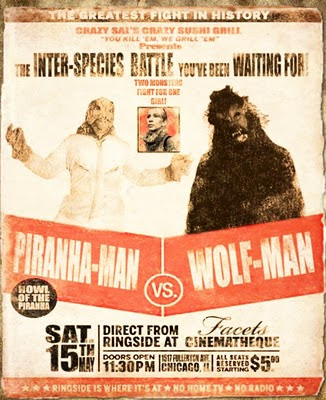 This movie has been calling to me on the U-verse for too long. Check out the trailer: 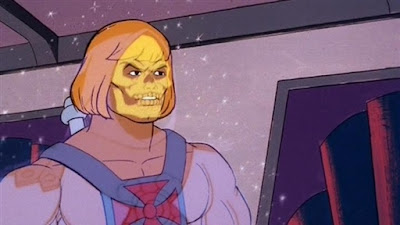 From the episode "She-Demon of Phantos" from He-Man and the Masters of the Universe. A magic spell makes He-Man look like Skeletor. I always thought that was a weird but very effective visual.
Posted by Mike David Jr. at 3:37 PM No comments: 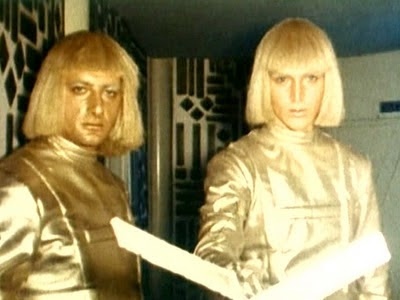 Bodyguards Dama and Nirkon D'Lessh of the Auruma Community of God City. One of the few liquid races recognized by the Vulkin Empire, Aurumans utilize humanoid bioshells to interact with other peoples. The D'Lessh Brothers, famously clad in their golden bioshells, provide bodyguard services for both the poor and the rich. How they determine who they aid is a mystery to all involved. 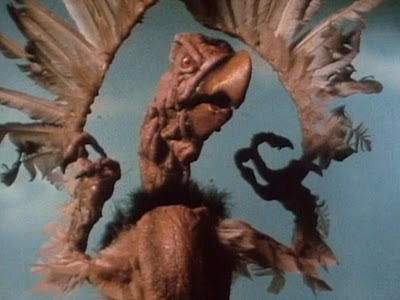 With the fall of the Vanth Sector's Navigation Grid, the appearance of natural Cross Planarl Gates grew in number. The North Mountains have several of these, watched over by the High Avian Daemon Melavatu the Watcher. While his true form may appear slightly ridiculous, Melavatu's canniness and magical ability keeps an uneasy balance between the Material World and the Realms of Spirits. 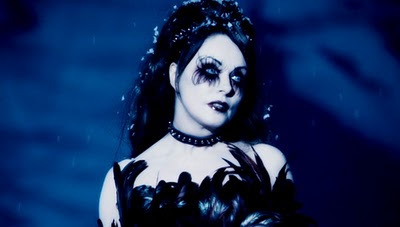 Among the servitors of the Zombie Princess is her Justicar, Lady Evangeline Lenore Mabuse, called the Lady Raven by the denizens of the Holdings. Known across the face of Vanth as a honorable and dangerous vampyre, she enforces the edicts of the Zombie Princess on those who cross her liege. Lady Raven wields the blade Mistmourn and the advanced mesmeric abilities possessed by several members of her family. 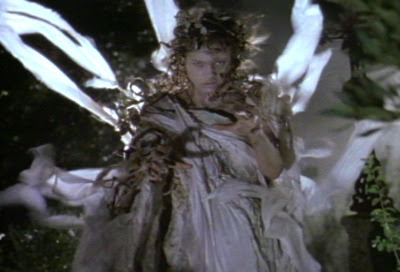 The Great Spineywood keeps its secrets well. Many expeditions into it's dark glade have never returned. Those that have tells tales of strange plant creature that walk as men, elves and wookies. Legendary Vanthian author Werdna H'Tedirem was one of those rare people. Above is Herbskin Rowanbriar, one of the Battle Dryads who ruthlessly protect the Heart of the Forest from harm. 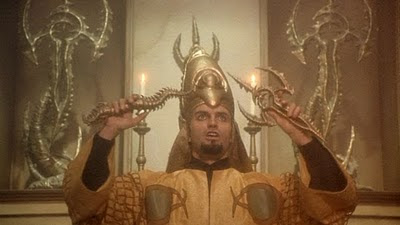 Many are the Gods, Goddesses and Demons of Vanth. Beyond the 777 Gods of the Vanthian Pantheon exist the Lords of Beyond, entities of Malevolent Power. The Blasphemer of Shadow, a former citizen of the City of Blackhawk, seeks to open the way for the Lords to reclaim Vanth. He is pictured here wearing the Vestments of Aggnotha-dam, thought lost in the waning days of the Second Camelon Empire.
Pictures from Badmovies.org, some names generated with the fine name generators at Seventh Sanctum.
Posted by Mike David Jr. at 4:33 PM 4 comments: