Another episode of Goldie Gold and Action Jack!

RPG Blog Carnival: 5 Thoughts on The Future of RPGs

This is my first contribution to the RPG Blog Carnival. Of course I would have to choose a serious subject. Here are some musings on the future of roleplaying.

The Printing and PDF Connection

One of the things you will see more in the future is even more PDF support for Printed roleplaying games. You already see a lot of this now. The average small to middle tier RPG Company might put out their core rulebook, wordbook, maybe an opponents book, and an adventure collection to your FLGS. On the web they can put out a huge variety of support material in PDF and print on demand formats that would not be economical to sell in the stores.

You’ll also see more of the e-book version of an RPG come out before a print copy is ready for sale. That is just a truth of the industry. If you can make money now on PDF rather than wait several months for the print copy to come out—what would you do?

You will see the amount of publishers who put their entire product line out on PDF increase as well. With places like Office Depot and Kinko’s able to print out your e-book, and the ability of publishers to set up a Print-on-demand front on Lulu, this may be a more attractive option.


The Death of Dungeons & Dragons as an RPG

The above statement may seem like overkill, but I believe this is a definite possibility. A number of factors make this possible including the fact that 4e D&D probably didn’t sell what Wizards of the Coast thought, the “I want results NOW” drive of the Hasbro Overlords, Wizards’ arrogance in several situations, and the OGL itself (see below). All of this could add up to Hasbro shutting the whole shebang down. They could sell the game to another company (probably not). More likely they will shut down the game for a while, then use the properties, as they will. Then D&D will return as a board game (as my friend Joe thinks) under the Milton Bradley brand.

The OGL and the Rise of the Retro-Clones

In my opinion, the OGL was one of the greatest forces of change in the RPG industry since it debuted in 2000. I believe that the fact that the OGL exists beyond 3rd edition D&D will have detrimental effects on the 4th edition of said game. This is for one simple reason: you just gave other people the tools to create games that can compete with yours. 3.0 and 3.5 edition D&D may be gone, but you have Pathfinder (the 3.5 rules touched up), True 20, Mutants & Masterminds, Spycraft 2.0, the Conan RPG, and the d20 SRDs that are still rolling.

Other children of the OGL that will affect the future of roleplaying are the retro-clones. Games such as OSRIC, Labyrinth Lord, Swords & Wizardry, and others all use the OGL to recreate the D&D/AD&D editions of yore. Many have a few twists here and there, but they have definitely tapped into a desire to revive the old school games. The love of the old school goes beyond using the OGL to reconstruct the rules of the past. Games like 4 Color, ZERFS, and the remastered Star Frontiers rules all mark a return of older systems that emulate the games of the past.

I think we’ll see more of games like Mutant Future that use the retro –clone concept and bend it. Take a retro idea (Gamma World-sequel game) and give it a twist (what if they used the Basic D&D engine for Gamma World). The Hideouts & Hoodlums game by Scott Caspar uses Swords & Wizardry (a retro-clone of the 0e D&D rules) for Golden Age Superheroes. That’s the kind of games that I think we’ll see more of.


The Sharing of Rules and Settings

One of the more interesting things that came from the OGL was people able to publish their own settings and rules expansions. Other game systems have continued this strategy. Some of them are descendents of the d20 system, and some are not. Look at your local game store or favorite PDF storefront. Game rules that have either licensing or SRDs include Savage Worlds, True 20, Runequest, Traveller, M&M Superlink, and the Hero System. These are the ones off the top of my head, not including the retro-clones above.

Another thing will see is the sharing of worlds as well. There are at least 5 different rule system versions of Green Ronin’s Freeport world that you can download. You can get Ken Hite’s excellent Lovecraft/Golden Age Comics pastiche Adventures in Darkness in M&M, T&J, and Hero System editions with more coming. This sharing on both ends will continue.


The Strength of the Small and Fan Presses

The most interesting possibility in the future of roleplaying is what I consider the return of the fan press. This includes not only the fan sites and message boards with netbooks and hundreds of pages of game materials both fan and orginal free rpgs.

This goes into the realm of small press publishing on sites like Lulu and other print-on-demand venues. Magazines like Fight On and Knockspell are part of what I am referring to, as are those small press companies that are one or two guys making a game and publishing it themselves.

Related to this are the truly small press items that people have been putting out. I’m talking about self-published works like Geoffrey McKinney’s Supplement V Carcosa, James Raggi’s Green Devil Face, the recent fanzine editions of Iridia, and Jeff Rients' recent opus The Miscellaneum of Cinder. This is a fascinating trend that I hope will continue. Hell, if I had time I’d love to try a project like that myself.

These are some of my thoughts. Make of them what you will.
Posted by Mike David Jr. at 7:50 PM No comments:

Not much for Kirbymania this time:

Jack's proposal for a Phantom cartoon 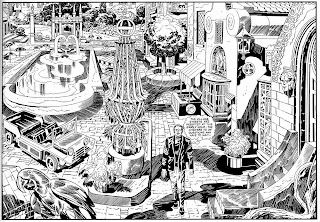 Your next Mutant Future campaign map: 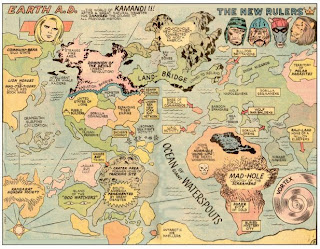 Kirbymania's animation bent continues with my two favorite episodes of Thundarr the Barbarian:


I always enjoyed how the various sorcerors were presented in Thundarr. The strange appearences, technomantic magic, and utter disregard for normals is shown well here.

This episode has one of my favorite creature designs.

See you next time!
Posted by Mike David Jr. at 3:36 PM No comments:

Keeping up with the meme going around (and this list is not very organized or complete):


Films:
Conan the Barbarian
Hawk the Slayer
The Ator Movies
The Deathstalker movies
The Sword and the Sorcerer
The Warrior and the Sorceress
Excalibur
Equinox
The Evil Dead trilogy
Countless Hercules/Goliath/Machiste movies
Yor the Hunter from the Future
B-movies galore


Cartoons:
Dungeons & Dragons
He-man and the Masters of the Universe
She Ra Princess of Power
Thundercats
Blackstar
Thundarr the Barbarian
Galtar and the Golden Lance
The Herculoids
Visionaries
Inhumanoids

As I said, this is incomplete. Regarding the cartoons, I am a child of the 80s. Many of the ideas I have used in Fantasy RPG games have been "borrowed" from cartoons. Also notice the amount of bad movies and such on my list. I am of the firm belief that we can learn as much if not more from our failures than our victories.

See ya later
Posted by Mike David Jr. at 1:25 PM No comments: 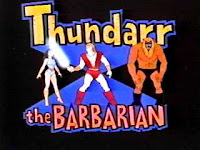 This series from 1981 was '80s pulp through and through. The world's richest girl Goldie Gold and her ace reporter/"friend" Jack "Action" Travis, and her dog Nugget travel the world in search of adventure. They report for Goldie's newspaper The Gold Street Journal for editor Sam Grit. Look beyond the cheesy "ultra rich" schtick and dialogue and enjoy the fun. Look at the villains and characters-that's Jack, Baby.

Here is episode 1: Night of the Crystal Skull

And yes Virginia, the writer of Night of the Crystal Skull was Steve Gerber, the late creator of Howard the Duck.