Gen Con in My Back Yard 2: 17 Years of Memories

In a previous blog, I related a small bit of my life with Gen Con being based in my hometown Milwaukee, Wisconsin from 1985 to 2002. This was the first part of my entry into the RPG Blog Carnival for August 2009, hosted by Chgowiz. Below in no particular order is a Baker’s Dozen of reminisces of my 17 years going to Gen Con.


This list could be endless. I could talk about going to the Safehouse, and having Lou Zocchi explain to me why his dice are the best in the world for the umpteenth time. The hidden treasures hidden in the boxes at Crazy Egor’s and having person after person tell me why their game in the NEXT REVOLUTION IN GAMING!

Maybe I should go to Gen Con next year.
Posted by Mike David Jr. at 6:56 PM No comments: 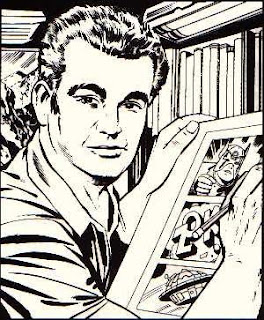 Today would have been Jack "the King" Kirby's 92nd birthday.

Do yourself a favor. Go read some comic books, and bask in the creativity Jack Kirby help build.
Posted by Mike David Jr. at 6:45 PM No comments:

This blog is in response to the RPG Blog Carnival topic for August of 09. This month Chgowiz is hosting it over on his blog Chgowiz's Old Guy RPG Blog.

Milwaukee is many things. It’s the City of Festivals and a Great Place by a Great Lake. It’s been talked about in classic movies and classic television. It's the home of the Racing Sausages and the Bubbler. I’ve lived there all my life.

And for over 15 years it was the home of Gen Con.

It was the Saturday of Gen Con in 1986 that my dad dropped my friend Sean and me in front of Mecca Arena. My dad had given me $20 for the day. That was enough for a $5 visitors pass, some money for food, and 10 bucks for buying some gaming stuff.

I had never been to a gaming convention before. My knowledge of the gaming community was playing D&D and Marvel Super Heroes with my friends and reading gaming magazines. The games I had gotten were from places like Waldenbooks and B Dalton, or game stores like Napoleons in Milwaukee. Pa had heard that Gen Con was in town and asked me if I wanted to go. Of course I said yes.

Sean and I waited to get into the hall with everybody else until the magic 10 AM opening of the Exhibit Hall. When they opened the doors I was in Gamer Heaven. I played in Gaming demos. I got to see RPG and board games that I had only seen in advertisements in Dragon. I got to meet people who's work I had read and enjoyed. When Pa pulled up at 6 PM, we carted our grab bags full of catalogues, freebies and purchases and put them in the car.

“Did you have a good time?” Pa asked me when we got home.

So I kept my promise, finding some way to get to Downtown Milwaukee every year Gen Con was in town until it left in 2002. It became part of my summer tradition, getting up early in the morning on Con day to get an early start on the convention. Saving up the money to by up all of my small press favorites. I went at least 1 day to Gen Con every year from 1986 to 2002. That was some good times.

When it was announced that Gen Con was leaving Milwaukee, I was saddened but I understood. The city had never treated Gen Con with the respect that one of the biggest moneymaking conventions in the city deserved. Promised hotel building never took place, and other local decisions made the move to Indy inevitable. Late July 2003 was the first Gen Con I had missed in 17 years.

I finally made to Indy for Gen Con 2008 last year. I had a blast, and it was great wandering around the Con again. It felt like visiting a favorite cousin that lived around you for a long time, but moved away. I know I can always go to Indianapolis to attend Gen Con.

But I will always have the early Milwaukee Saturday mornings in August eating breakfast and getting all my Con gear together. Then I get in my car, driving about five miles to attend the Biggest Gaming Convention in the World, right in my backyard.

In the next blog, I tell some of my favorite memories of 17 years attending Gen Con.
Posted by Mike David Jr. at 4:56 PM No comments:

Everybody has his or her favorite authors and game designers. For me, Tom Moldvay is one of those game designers who influenced my role playing and my writing. Gary Gygax and Dave Arneson may have opened up the dungeon for me, and I started playing the Red Box Basic D&D edited by Frank Mentzer. But for lost cities, islands of dinosaurs and Clark Ashton Smith in my Dungeons and Dragons, that was Tom Moldvay .

And then there was Lords of Creation.

Every gamer has their guilty favorites. Lords of Creation is one of mine. I bought it for $10 at a long gone toy store at a lone gone shopping mall. This was the deep immersion to the zany world of Tom Moldvay. This game awoke my appreciation for the weird and bizarre in RPGs. One of the best descriptions of the game is here.

Submitted for your approval is a table designed to add a little Moldvay feel to any scenario. Roll a couple times on the table and let the fur fly!

1 A portal opens to a random elemental plane: Roll a d6:

4 Strange prophetic dreams begin for the most intelligent player in the party. They can be useful, terrifying or both.

5 The vehicle the characters are traveling in is intelligent or a transforming robot.

6 A portal to the Plane of Shadow opens! Roll a d6:

8 Random famous historical or fictional character interacts with the PCs.

9 Different versions of a creature or character meet and fight!

11 A portal to a parallel earth opens! GM Choice where it leads. Nazis are probably involved. Fricking Nazis.

12 A mysterious benefactor and/or their adversary choose to use the PCs are their representative in a grand conflict.

13 Random gates are littered through the campaign world.

14 A portal to the Realms of the Gods opens. Roll 1d12 for Mythos:
15 A portal opens that leads to a planet across the galaxy

16 Suddenly, dinosaurs attack! I got nothing. Throw a bunch of them at the PCs.

17 Have a sense or section of the scenario that is a tribute/homage to a popular book, movie or TV show.

18 Take every monster book in your RPG collection. Pick 5-15 monsters and sprinkle them throughout the scenario however you can.

19 A portal to a world based on a fictional setting opens. This can be an exact simulation of the setting, or one that is darker or lighter than the actual setting.

20 GMs Choice. Get as weird as you want. Some of my favorite moments in the Lords of Creation are scenes in the modules that make you say "WTF?"
Posted by Mike David Jr. at 6:55 PM 2 comments:

And now my favorite scene in Starcrash:

My reaction when I first saw this scene: