Happy Belated Birthday to one of my idols, Jack "The King" Kirby.

Superstretch and Microwoman was part of the Tarzan and the Super 7 animation block that Filmation had on CBS circa 1979. This show was among the first cartoons I can remember where the main leads were African-American (this was back in the late 70's). These are humorous superhero adventures, with the main characters engaging in banter as they put the criminals away. I remember liking the show when I watched it as a kid. Here's an episode:

Quick Thought I Had At Work: Mind Flayers and Zombies

Here's a quick thought I had at work: 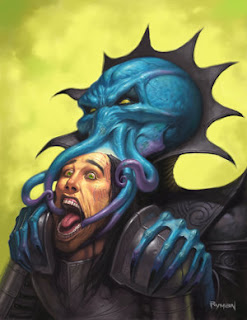 The mind flayer is a classic AD&D monster that has terrorized campaigns around the world for decades. Different origins, variants and alternate versions of the mind flayer have been designed for various RPGs, especial since the illithids have been deemed as product identity by WotC. But I've never seen this one.

Mind flayers are an advanced form of undead that wield strange powers due to the brains they eat.

The mind flayers once existed as any other race until they were infected by an ancient contagion. The contagion increased their psionic abilities but gave them an insatiable craving for the brains of other intelligent beings--including their own race. Mind flayers can no longer procreate normally. They reproduce by infecting a promising victim with some of their own flesh. The contagion takes over and the new mind flayer is brought underground to his or her new people.

This idea has some other possibilities:

If anybody uses some of these ideas, let me know!
Posted by Mike David Jr. at 6:39 PM No comments:

Mutant Future Inspiration: Zordax II: The Metal War and She (1982)

Here's a short film I heard of a year of two ago that is a tribute to 80's Italian post apocalyptic movies. Zordax II The Metal War is great Mutant Future inspiration, a bite size chunk of after the bomb type fun.

Now here's two clips from a rarer movie, She starring Sandahl Bergman. H. Rider Haggard this is not. This is full throttle bats#!+ crazy 80s after the bomb movie fun! I had an old VHS copy but it got messed up, and it never was released on DVD that I know of. She is worth seeking out in whatever format you can find, because of scenes like this, presented below:

I'm sure that an enterprising Mutant Future GM can find a ton of ideas from these clips!

Filmation Friday: Back From Vacation!

Hello folks, I'm back from Winneconne and eating way to much at the Wisconsin State Fair. For Filmation Friday today I have two entries: 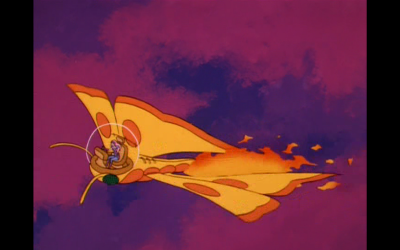 First, Glimmer is in trouble piloting a butterfly-like flyer from a She-Ra Princess of Power episode. Note the very Elvish Spelljammer design look to this vehicle.

I'll be gone for a week of fun, relaxation, and recharging, visiting my second hometown of Winneconne, Wisconsin. When I come back I hope I'll be over this posting funk and will put more stuff on the Amazing RPG Fun Pad. While I have been reading many of your blogs religiously, I just haven't had the gumption to type up some of my ideas. Everybody going to Gen Con, have a great time! Everybody staying home have a great time!