D20 Masters of the Universe-A Link 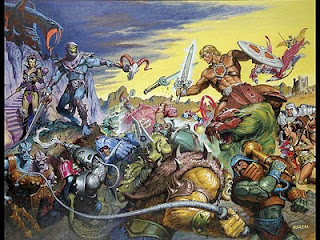 During one of my afternoon jaunts on the web, I stumbled on to this site while looking for conversions:
D20 Masters of the Universe
The author of the page has made one of the better RPG adaptations I've seen, even for a work in progress. There are rules for the specifics of the He-Man/She-Ra setting, the races you can play, and spell and class ideas. Even the worlds of the setting are described in D&D 3e planar rules. This is a blend of 3e rules and conventions blended with the MotU setting, and the author does a commendable job.
The character sections are currently small but interesting. There is plenty use of prestige classes in the character write-ups. Many characters are mere the name, alignment and what classes they are. The best part are the sheer amount of characters and monsters that the author has provided. You just don't get He-Man and Skeletor. You get stats for obscure MotU characters as Plundor the Despoiler (an evil rabbit) and Octavia (a green octopus lady from She-Ra). Pretty neat. 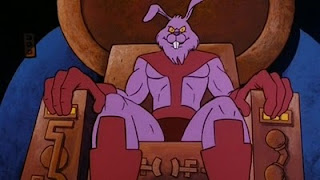 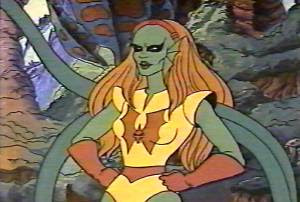 Check out this site if only to witness a really good RPG adaptation of the Masters of the Universe setting.
Posted by Mike David Jr. at 4:49 PM 3 comments:

This is Awesome: JLA/Wu Tang Clan! 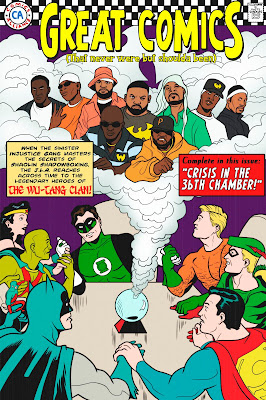 Enter the 36 Chambers, Suckers! The first Earth-1/Earth-Wu crossover! I would so buy this comic.

Found this on the Comics Alliance site. The comments after are pretty funny too.
Posted by Mike David Jr. at 8:06 PM No comments:

One of my great loves is the Spelljammer setting. This fantasy space campaign setting for AD&D 2e is unjustly maligned and teased by some. But I love it from the amazing fantasy spaceships to the giant space hamsters.

I also love the Unisystem--the RPG system designed by CJ Carella and used by Eden Studios. There are two versions of the system. Classic Unisystem is used for All Flesh Must be Eaten, Witchcraft and Conspiracy X 2.0. Cinematic Unisystem, a more streamlined version, is used for Buffy the Vampire Slayer, Angel, Army of Darkness, and Ghosts of Albion.
Here is a version of the Spelljammer race known as the Giff envisioned as a demon race for the Buffy or Angel RPG.
GIFF
11-point Quality 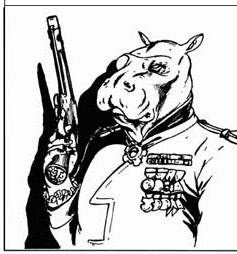 Giff are a warrior race that has been on Earth for the past three hundred years. They appear to be stocky humanoids with hippo-like heads around 8 to 9 feet tall. Giff skin has the texture of a tough hide, with gray, gold, or black being the normal colors. Their legs are cylindrical, resembling again the legs of a hippo. Most giff dress in military style regalia. This can range from a full general's uniform complete with stars and bars to simple military fatigues. Although they look amusing, they are a race of fighters, and are respected for their battle prowess.
The giff hail from a forest-filled hell dimension they were driven from centuries ago. The exact reason from this has vanished in the mists of time. The entire race was scattered across the multiverse by an unknown force. Several families were dropped in Africa in the 1700s. It is from these clans that the giff of today are descended from.
All giff, male and female, are warriors. To the giff, two things matter most: battle and orders. Battle is a both a job and an art form to the giff. Recreation involves tests of strength and skill with weapons and explosives. The giff love to brawl, and will join a good bar fight just for fun. They also hire themselves out as mercenaries to make money for the clans and themselves. Orders give a giff purpose, something to follow. The giff respect a chain of command, the more
structured the better. If a giff mercenary takes money from a man or organization, he will follow the employer loyally unless he is cheated, the employer is killed, or he breaks a rule set down by the giff clans.
One thing giff will not do is fight other giff under the command of another employer. All giff mercenaries inform potential employers of this. An employer who presses the issue will find giff mercenaries refusing to do simple tasks. Further incidents lead to incidents such as the destruction of the Milwaukee branch of Wolfram & Hart by 10 angry giff with swords, shotguns, and lots of explosives.
Needless to say, the giff will not work for Wolfram & Hart anymore.
Giff have a +4 to Strength and +2 to Constitution. They have 3 levels of Hard to Kill and Natural Armor 4 (because of their hide-like skin). A giff's forehead and snout have hard, bony plates that give them a Natural Weapon doing Bash damage 3 X Strength (1 point), requiring a Head Butt maneuver roll. They also have a natural Resistance of 5 against Mystical effects. This resistance is always on, even against beneficial spells.
On the downside, the giff have a -1 to Intelligence. 9 foot tall hippo men are not like the average folks you see, so giff have the Supernatural Form: Definitely Not Human drawback. The giff devotion to the principles of Order and Battle give them two Mental Problems: a Severe Obsession for Following Orders and a Severe Obsession for Battle. The Battle Obsession is different from the Antisocial Impulse (Violence) drawback in that the giff don't go berserk; they just love getting into fights and contests. Finally, the giff are loyal to their people, resulting in an Obligation to the Giff Race at the Important level.
Giff characters usually have high scores in Getting Medieval, Gun Fu, Kung Fu, and Wild Card (Armory). Many giff have a Mild Delusion (Distrust of Magic) due to their natural resistance. Honorable and Recklessness are common drawbacks.
There are rumors of giff that have turned against their race and serve dark gods. These rumors and usual met with silence or not so friendly brawling when brought up.
Using the Giff in Buffy/Angel
The part that most giff would play in the Buffyverse would be that of either friendly opponent or bombastic ally in the demon underground. Giff are a militaristic people. While they are not by nature a cruel race, they do enjoy a good bareknuckle brawl. The Cast may encounter a giff mercenary employed by a demon gangster who will brawl at command. They may notice that the giff will not break certain rules or truces. A subplot could develop that a Big Bad's actions towards the Cast forces the giff to choose between his employer and his code. If push comes to shove, a giff who has been betrayed is a dangerous thing.
One could also picture a giff character as an ally or a Cast Member. A Slayer who saved a giff would have a loyal friend for life for two reasons. First, a giff would love the constant battle that surrounds the Slayer. Second, the giff respect warriors and hunters and the Slayer is certainly both of those. A giff would give up half his or her arsenal of weapons to help train a Slayer army.
At first glance the boisterous nature of the giff would not lend itself to an investigory campaign . They are more than willing to work for law and order as well. This is not just in the role of the muscle or the weaponsmith. Some giff have become very good at intimidation, able to get a subject making up sins to confess without throwing a punch. These giff are considered odd by their people, but they do have their uses.
There are rogue giff. Giff unrestrained by the codes of their people usually tend towards two paths. The more common path is that of the Beserker, a madness that makes the giff a brutal warrior obsessed with death. Much rarer is the path of the Diabolic. A diabolic giff is capable of cruelties that would make a vampire envious. There are rumors of a sect of giff warriors whose duty is to slay these rogue giff, but those are just rumors.
This version of the Giff is inspired by the version first present in the Spelljammer boxed set by TSR. No copyright or trademarks are being challenged.
Posted by Mike David Jr. at 8:45 PM 2 comments:

A New Mario Brother? Fun with The Generator Blog

I have a new favorite timewasting site and it's called The Generator Blog. Here a metric ton of links await to help you create, inspire some thoughts, or just waste time at work.

I really don't want to think of what the bonus round looks like for young Howard.
Posted by Mike David Jr. at 2:42 PM No comments:

Yeah, I know it's been a while since I've posted, but the writing just wasn't there. But now I feel more ideas coming on, so it begins again.

*The Advanced Edition Companion by Goblinoid Games is a stroke of genius. Like many gamers, I started out with Red Box D&D. The people who were DMing often pulled goodies from the AD&D game and grafted them on. The AEC for Labyrinth Lord shares this spirit as well. More spells, classes, monsters, and stuff that brings back memories. Other people have explained the coolness of the AEC better than I could. Just get yourself a copy.

*Mutant Future Mania: The recent upswing of the Mutant Future goodness in the blogosphere is fun. My current favorite blogs are The Savage AfterWorld with the masterful Thundarr Thursdays and Brutorz Bill's Green Skeleton Gaming Guild, who had me when he stated Sleestaks. A ton of great material has already been produced. I may have to stat up some Mutant Future stuff, too. Maybe I should go the Grindhouse route...

*Two days ago I was looking up the Earth Alpha blog for some BASH RPG stats that the person had posted. One of the posts was a discussion about public domain superheroes. Following the public domain tag, there was a post about a wiki dedicated to the superheroes and supervillains that have fallen into the public domain.

Aslanc has posted his thoughts about using the characters here.

The link for the Public Domain Super Heroes wiki is here.

I love the work that others have done with these characters from the comics of Bill Black, Alan Moore, and Alex Ross, to Ken Hite's Lovecraft/Superhero opus Adventures Into Darkness. When I was a boy, I wrote up stats for many of these characters using the Marvel Super Heroes RPG game using entries from Jeff Rovin's Encyclopedia of Superheroes.

If you're looking for some superhero campaign inspiration, or trying to fill in your character's background, check out the Public Domain Super Heroes wiki.

People over the age of 25 will remember this. Turn up the volume up to really loud before you hit play.