Vote for Swords & Wizardry in the Ennies 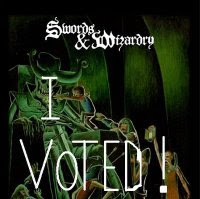 For the first time in several years I have voted in the Ennies, due to the great arguments by several of the blogs I check out regularly.

I voted for Swords & Wizardry by Mythmere Games because I really like how they did the game. I voted for publishers like Goblinoid Games, Green Ronin, Rogue Games, and other companies I really like. Other things I voted for were several Pathfinder modules (I like the setting), the massive Starblazer Adventures by Cubicle 7, and the Worlds of Dungeons and Dragons, Vol. 2 by Devil's Due Publishing (my friend Jim Lowder worked on it).

I also want to join the call for everyone to vote for Swords & Wizardry in the Ennies. It's games like this that will be the future of fantasy roleplaying.

And vote for Worlds of Dungeons and Dragons, Vol. 2 by Devil's Due Publishing, because my friend Jim worked on it and he's a pretty cool guy.
Posted by Mike David Jr. at 5:29 PM No comments: 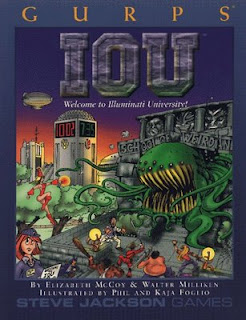 One of my favorite GURPS Third Edition books was GURPS IOU, written by Elizabeth McCoy and Walter Milliken and illustrated by Phil and Kaja Foglio. It's a humorous setting (with darker options available), where the players go to Illuminati University an institute of higher and very weird learning.

I still have my copy signed by the artists. For a long time it was out of print, but Steve Jackson Games has finally put it out on PDF on e23. If you love a good comedic setting I say check it out.

Oh. You may ask what the O stands for in IOU.

You're Not Cleared For That!

Reports From Random City and Beyond

There have been a lot of sandbox settings showing up on the blogosphere lately, and I love them all. Here’s part of mine. It’s a supers/urban fantasy/conspiracy/action cartoons/pulp/B-Movie/whatever-else-I-can-think-of setting I like to call Random City.

Strange Happenings in the News...

In Random City, the crime rate has gone down in part to the controversial deputisation of several nonhuman clans. The clans, including the Ravenscar Gargoyle clan, and the Ironfist Forge Dwarves, have helped crush several drug rings and cult activities.

In Las Vegas, a small group of paranormals called the High Rollers stopped the latest plans of the Mad Pharaoh Elvis III. The crazed reincarnated Egyptian was trying to capture the Luxor to use as his base of operations. The incident did not reawaken Robert and his Seven Hoods, who will only return in Las Vegas’ darkest hour.

In Boston, the Phantom Fighters of Manhattan and hometown heroes The Scheimer Agency reluctantly teamed up again this week. Both ectoplasmic elimination agencies had to join forces to banish the latest manifestation of the Ghost Lord Benthor Gomax.


In San Diego, the recent upsurge in supernatural activity on the West Coast lead to the formation of the Summers Foundation. This organization, born under protest from both anti-paranormal and human rights groups, bills itself as clearing house for occult knowledge. Some say it equips monster slayers from around the globe.


In Roswell, the Explorers of the Unusual unearthed a metal plate etched with pictograms similar to those found in Glozel, France. Unfortunately forces unknown stole the plate before in could be taken to Explorer Mesa.


In Indianapolis, the first annual Artifact Hunter conventions began on Thursday. Amid the usual protest whenever these intrepid archaeologists gather, the weekend is full of seminars, contests, and exhibits. Panels included in the convention include “Finding that Deathtrap”, “Betrayal as Part of the Business”, and “Love and Relics: Romance in the Field”.


In Omaha, authorities are dealing a rash of involuntary cybernetic enhancements that has developed in the past week. Victims of the “Cybering” incidents often awoke in their own beds, with the enhanced parts plainly visible. Said enhancements seem to be made of a flexible ceramic and resilient to damage. Calls are going out to the paranormal community for assistance.