Today is the 122nd birthday of the Old Gent of Providence himself, H.P. Lovecraft. I thought it would be fitting to present some of of B-Movie visions of his work. No doubt Lovecraft would be horrified by these movies, but they are an exploitation --I mean celebration of his cosmic vision.

Eclipsed by Reanimator, From Beyond was a sick squishy adaptation of the short story. Some of the scenes in this movie still make me wince.

The Shunned House is a film by Italian director Ivan Zuccon. The narrative of the film includes elements from "The Music of Erich Zann", "Dreams in the Witch House" and the title story. Admittedly a bloody mess, but there are some effective visions of time folding in on itself.

Beyond the Dunwich Horror is best described as a blend of Lovecraft and Italian Horror. This modern day adaptation by Richard Griffiths is low budgeted but fun. Eyes take a beating in this one.

The H. P Lovecraft Collection is a series dedicated to adaptions of Lovecraft's stories. There are some real gems in these collections and some interesting interpretations of the master's work. 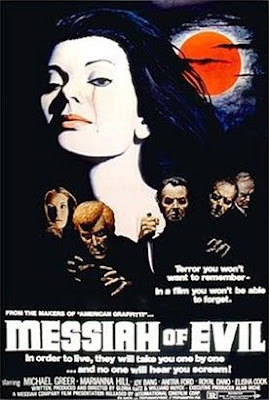 Welcome to B-Movie Monday! Presenting today Messiah of Evil (aka Dead People), an underrated classic from 1973. A very weird and dreamlike picture, there are some striking scenes in this one. Great inspiration for a twist on the average "rise of the zombies" scenarios.