A British horror movie with Tom Baker and Donald Pleasance.


The next two I blame on my friend Gene because he put some trailers on Facebook. 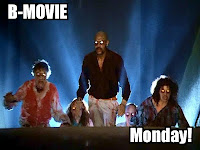 Hey! Made a a new logo for B-Movie Monday!

I  found this while doing some stuff on YouTube. From 1962 I give you the bizarre Mexican classic El Barón del Terror, known in America as The Brainiac. First enjoy some trailers and a Mr. Magoo cartoon then delve into the bizarre plot, which is...well, I'll let Wikipedia explain:


In Mexico City in 1661, Baron Vitelius of Estara is condemned by the Inquisition and sentenced to be burned at the stake. As this sentence is carried out, the Baron promises that he will return with the next passage of a comet (visible over the scene of execution), and slay the descendants of his accusers.

The film then fast-forwards to 1961, where the promised comet does indeed return, carrying with it Baron Vitelius, who takes advantage of his considerable abilities as a sorcerer to carry out his threat: he is able to change at will into the hairy monster of the title in order to suck out the brains of his victims with a long forked tongue; furthermore, he has strong hypnotic capabilities and is able to render his enemies motionless or force them to act against their wills.

Have some fun with this one. You can get a whole scenario for Trey Causey's Weird Adventures now that I think about it...

Here's a character for the Tales of the Space Princess game, the new game from Mystery Men! author John Stater. It's s good little game. Check it out! 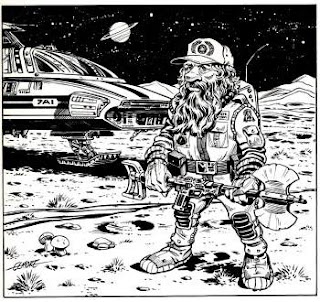 Thorgrim Robustný was destined to be a Craftsman, as his father and his grandfather before him. On the day he was to begin training mercenaries in the pay of the Oligarchy of Chaar decended upon his family's holdings in the Kamen Asteroid Field. Many of the Stormcloud Clan and their associate families perished in the Oligarchy's thirst for Kamen Relics in the years that followed. The survivors of the Chaarian purge all took the name Stormcloud in addition to their own family name and went forth to claim the Relics of their people. Like many of his brethren, Thorgrim makes money as a mercenary, offering his services as a star warrior in exchange for money and information. There are times Thorgrim will join other clansmen and clanswomen in Crusades to reclaim that which belongs to the Stormcloud Clan.

It was the 80s. If you had an US/Italian/Egyptian movie, you had to have mummies and zombies in it.

Makes perfect sense to me.

Enjoy the cheese that is Dawn of the Mummy in its entirety.

Inspired by the masterful Labyrinth Critical posts over at the No Signal! blog in general and the Luchador class draft in particular I repost an old favorite. Here's a Luchador organization for the Mighty Land of Vanth!


The Caballeros use strength, agility, and legendary wrestling ability to battle monsters and mad scientists. Each luchador knight has a unique mask that is chosen through deeds and visions. Their skills of wrestling are honed to a fine edge, and the oldest members of the Caballeros de la Máscara are said to have almost mystical powers. Legend tells that one of the founders or the order, La Máscara de Oro (The Golden Mask) battled Darth Viraxis to a standstill after a three day conflict.

There are legends of Fallen Caballeros who have betrayed the ways of the Luchador Knights, but most of these are believed to be stories used to scare children. If they are true, these Fallen Caballeros may become a great danger to all the lands of Vanth. Darker still are the archenemies of the Caballeros and the purpose of their creation: the Lich Templars of Ossorio. These blood drinking fiends are entombed in the North Mountains, but their dark influence is felt throughout the lands of Vanth.
Posted by Mike David Jr. at 8:17 PM No comments: