Since I probably won't be getting back online until after the New Year, I want to wish everyone the best New Year you want, need, and deserve!

And now, for your listening pleasure, the theme song to Yor the Hunter from the Future. Yeah, that's Reb Brown, m'man.

Sorry I haven't posted in a while. The Holiday Season is kicking my ass! But Uncle Mike does have some Youtube Goodies for you.

First, one of my favorite Christmas specials: The Rankin Bass Twas the Night Before Christmas! 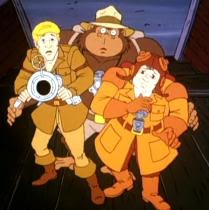 One of my guilty pleasure shows that I watch when I can is Filmation’s Ghostbusters. Yes, I love The Real Ghostbusters. It is the greatest cartoon adaptation of a movie ever made. But there is a fun anything goes energy to Filmation’s version that can be fun. I go as far to say that if Filmation had named the series anything other than Ghostbusters it probably would be more highly regarded. Hell, I like both series, truth be told.

But Mike, you ask. Why did you head this post with Encounter Critical Theatre #1 when you’re talking about Ghostbusters? Good question. Filmation’s Ghostbusters did bust ghosts, just like the name said. But they also fought werewolves from the future, Aztec sorcerers, trolls, and great ghost gorillas. Great ghost gorillas that lived on another planets with gorilla robots. All this driving an intelligent jalopy that could fly and travel through time!

Now you see where I’m driving at.

The following videos are of an episode called “The Looking Glass Warrior”. In it, aliens are traveling in the dimension behind mirrors to kidnap innocent people. The Ghostbusters investigate with the help some friends. This has some great stuff to steal for EC. When I get some time, I may even stat up some stuff from the episode.


And for those old school people that like the game Lords of Creation by the legendary Tom Moldvay, this episode would so make a great adventure for that game.
Posted by Mike David Jr. at 3:48 PM 1 comment: 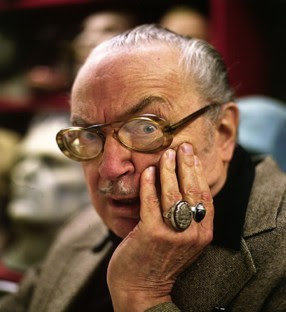 I was born too late to bask in the glory that was Famous Monsters of Filmland in its heyday. But I recognize that trailblazing that was done by Uncle Forry, and the pure passion he held for fantasy, science fiction and horror movies. The people he inspired to make movies and write fiction in turn were the ones who inspired and entertained me. For that I will forever be grateful.

Farewell, Uncle Forry. May you be greeted warmly in that great movie theater in the sky.
Posted by Mike David Jr. at 3:41 PM No comments:

Thanksgiving was a surprisingly busy! But now, from the vaults of my days on All of the Above, the GURPS APA I present,

This seed can be used in any fantasy setting that has magic. It was inspired by several sources including Metamorphosis Alpha to Omega (Amazing Engine), Spelljammer and the best sci-fi show on TV, Babylon 5.

The players find a strange archway during their journeys. Markings on the arch are strange, but seem to offer a unique experience and great power. If the PCs go through the arch, they are knocked unconscious. A gate has been activated.

When the PCs awaken they find themselves in a deserted castle room. Let them think that everything is normal until they really look out one of the massive windows. Instead of a normal landscape there is the vast emptiness of an interdimensional void.

The PCs have stumbled upon one of the greatest magical creations in the multiverse--the Complex Arcana. A cabal of sorcerers was the despotic rulers of the planet they were from. To keep an eye on their holdings (and to resist rebellions and assassinations), the wizards decided they needed a unique fortress. They took one of the moons of their world and sucked all of the life to empower the enchantment that became famous. The thirty sorcerers each built a castle built on the moon, then with one forgotten enchantment merged the castles into one mass, a complex for their rule.

The cabal ruled from its perch until it overextended its reach and called too much magic. Backlash from the sorcery ripped the Complex and some of the surrounding lands off the moon. The interaction of the cataclysm warped the permanent gates, rendering the Complex dimensionally unstable. It began to phase in and out of different realities.

A more serious side effect was the warping of the transport gates. Instead of allowing the sorcerers to go planet side it began to abduct towns, parties, and individuals. The cabal members who didn't die during the backlash were mostly killed at this time. Some, though, are rumored to have survived.

Over the centuries civilizations have flourished in the Complex. The wizards planned to be self-sufficient. Rooms were designed to hold nothing but crops. Of course, war still rears its ugly head, and there are lots of undiscovered areas just begging to be discovered.

For GMs the Complex can be a fun way to bring back old characters and creatures. For maps you can photocopy castle maps from any RPG. For races and cultures, use any of a million sourcebooks for any RPG system, other RPG races, even grimlocks from the Fiend Folio (shudder). The sorcerers design their castles by personal whim--it's a logical reason for all of your favorite implausible dungeon rooms for your players to romp around in.

Mutations Anyone?: Why should Gamma World have all of the fun? There is still a lot of weird magic still wandering around the Complex. A selection of knacks, advantages, and disadvantages can simulate a variety of mutations? Now you to can play a bat winged halfling. Used with common sense, mutations can spice up an ordinary campaign.

Rebellion on the Complex: An interesting campaign/adventure can be had if the GM decides that the Complex will stay in one place. A force made up of an uneasy alliance of kingdoms currently inhabits the Complex. Interests planetside command most of the armies on the Complex. The governments of the world are getting more and more corrupt. The armies discover some of the wizards' "toys" and proceed to plot secession from the planet below.

Alien Attack!: The squabbles and intrigues on the Complex have to be put aside when a race of ruthless aliens decide to invade the Complex and claim it for their own. It's a clash of magic and technology as the aliens can field quite an array of deadly hardware. The denizens of the Complex might discover that one of the sorcerers had prepared for such an occasion with a fine array of magic-powered conveyances to battle the invaders. Imagine Golem Powered Mecha vs. Tripods and you get the idea.

Guardians of the Complex: A member of the cabal was obsessed with the creation of what he called "the perfect army". He dabbled with obscure magics to imbue weapons, objects, armor, and people with amazing powers. Denizens of the Complex sometimes find one of his catalysts and are gifted with bizarre powers. You can have fun with this one. Pixies with the strength of 20 men. Flame breathing minotaurs. High Elves with orange rocky skin. Heroes can find plenty of evil to fight in the Complex. Supervillains can unearth weird magic to fight the archenemies with.

The Sorcerors Awaken: Rumors and legends have always been told that the builders of the Complex would return. Some of them have as liches--powerful undead wizards. The forces that now hold power would rather that such beings not be allowed to succeed. The goal of this seed is stopping the liches from destroying the Complex with a minimum of damage.

The Great Complex Adventure: A man who wants to hire them for an expedition approaches the players. Even if they refuse, they are teleported to a strange room with a giant crystal in the center. The crystal is Synthesis, who claims to be the consciousness of the Complex. The players are chosen to be his guides in his quest to physically tour the Complex Arcane. This is a journey throughout the castles. You can really have some nasty fun with this one.

The more I think about this one the more I think it would rock using a Labyrinth Lord/Mutant Future crossover or even a Mazes & Minotaurs variant to run it. now that I think of it Encounter Critical would rock for this too.