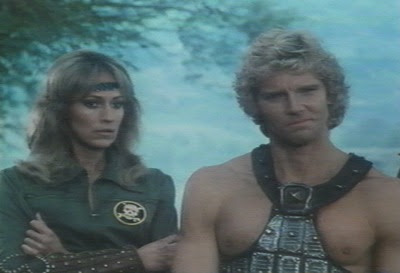 Among the more unique Mercenaries that frequent the Free World of Kronos are Lt.Calpurnia "Cali" Mitchell, of the Terran Expeditionary Corps, Retired and her mate Ursus, Son of Hercules, Slayer of the Martian Cyclops.

Cali is a third generation bionically enhanced solider who was forcibly removed from exploratory service. She terminated the rest of her squad that declared themselves gods of a backwater planet and began a reign of terror. The service agreed to leave her alone but there are those in the TEC who want revenge.

Ursus, Son of Hercules is one of the Heraclade, a human offshoot who claim direct decent from the Greco-Roman demigod Hercules (Heracles). Both male and female are strong and brawl at the least provocation. Ursus is known as the Slayer of the Martian Cyclops after he prevented the resurrection of the evil buried under the Martian Polar Wastes.

For missions that are in more open arenas Ursus and Cali are often joined by Ursus' childhood pet Victor, a rare kuranmord, a lion-like predator that usually rampages on Metallic Deathworlds. Ursus found Victor when he was a cub, and the two bonded over countless battles. He adores Cali just as much, and many an intruder has found out that Victor doesn't sleep when they do...

Cali and Ursus met during an inconvenient temporal crisis, and their first brawl raged in a world city for two days. After it was broken up, Cali brought Ursus a drink. They kept getting hired by the same employers and grew closer as a result. What the pair lack in wisdom and social graces they make up for endurance and righteous rage. 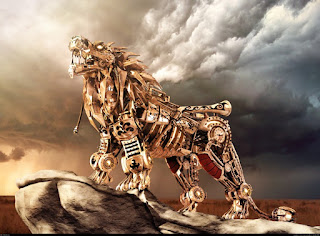 My blogging vacation is over!

Oh I have read plenty of your blogs, yet I must admit I just didn't have the gumption to write anything recently. But now I am coming out of my self-imposed exile slowly but surely. Here and now B.Movie Monday rises from the grave!

Here are some trailers. Gotta get back on the bike! Ciao!
Posted by Mike David Jr. at 1:35 AM No comments: