There's a new blog celebrating the works of B-Movie auteur Albert Pyun. Their not always movies that make a lot of sense, but the B_movie flair shines through. Check out The Pyuniverse Blog for more fun.
Bruno Mattei (best known in American under the name Vincent Dawn) is another guy who makes those movies that makeyou say "What the F...". Some might call him a Hack, but he's a hack I like. The following clip is an 8 and a half minute interview with Mattei. Subtitled, but with spoilers and some NSFW language:

And let's watch Bruno "borrow" from Aliens and Predator:


Fun fact: The above movie, also known as Shocking Dark, is titled Terminator 2 in many countries!


It's Reb Brown and his posse!

Finally, it's time to add some Luche Libre to your day:

Torg. Powered by Risus. Some Thoughts.

Had this thought at work: Running Torg using Risus as an engine.
Some ideas:
*Character creation would use 10 to 15 dice for picking cliches.
*Each players get 2 dice in a named home reality cliche. If you're from the cosm (reality) of the Nile Empire you would have Reality [Nile Empire] (2). A player could use dice given in character creation to raise the dice in the Reality cliche. A Reality cliche can be used in a fight to represent a Storm Knight using his home reality's rules to his/her's advantage. The GM can devise other uses.
*"Storm Knight" is added to one of the cliche descriptors.
*Cosms themselves can be rated like a character. Each Cliche can be used for or against a player, or to add flavor to an encounter. I got this idea from High Octane, a Risus supplement by Vin Diakuw. (Link below)
Sample Reality I Made Up:
Orrore Romano, the Italian Horror Movie Reality
Description: This reality is a brightly colored but deadly place. On the surface it appears to be similiar to Earth circa 1980. Underneath the normalcy is a nightmarish world of demons, zombies, witches, psychotic killers, and mad scientists. Over them all rule the Three Mothers, the Ladies of Sorrow who seek to bring their dark dominion over the earth. But there are those who fight the darkness, and each victory keeps the darkness at bay.
Cliches: Italian Horror Movie Reality (3), Monster Infested (3), Dark Undercurrent of Nightmare (2), Fighters Against the Darkness (2)
*Possibilities could be represented as a pool of extra dice that can be spent to add to rolls or other Risus tricks from the main rules or the Risus Companion (all up to the DMs discretion, of course.)
This is just a collection of thoughts. I may do something with this idea someday.
Torg on Wikipedia
Risus the Anything RPG: The current version of the rules onling.
Storm Knights: Jasyn Jones' Torg website. Chock full of great material for the Torg game. I wish I could come up with stuff like this.
High Octane: The inspiration of the Reality Cliches idea by Vin Diakuw.
Posted by Mike David Jr. at 8:50 PM 1 comment:

Lords of Creation Talk on Dragonsfoot

This may be a topic that only Jeff Rients and I may be interested in, but here goes. A Lord Fluffy is detailing some interesting ideas on revising Tom Moldvay's classic RPG Lords of Creation on the Dragonsfoot RPG Forums. I don't follow Dragonsfoot regularly, but I will keep up on this one.

One of my favorite fake Grindhouse style trailers (and fodder for Mutant Future) Kitty Kat Daniels vs The Nuclear Cannibals:

The incredibly awesome Fiend Without a Face trailer:

I'm gonna try to do this every Monday!
Posted by Mike David Jr. at 7:21 PM No comments:

By the end of the 40s both superhero comic books and Universal Horror movies were in a decline. Now you know the real reason. 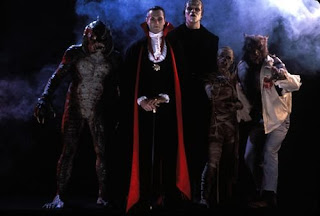 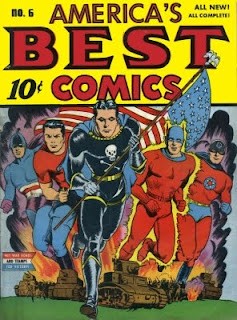 When Count Dracula gathers together the world's greatest monsters into a virtual legion of doom, the greatest superheroes of the Golden Age must band together to fight this monstrous onslaught!

From the courts of Europe to the jungles of the Congo a new war is waged. Not for the fate of nations. For the fate of Mankind itself.

I get my best ideas at work. I had watched the 1994 cartoon Monster Force (monster hunters in super suits vs the Universal Monsters) the night before and my mind began to wander. I took ideas from that cartoon and mixed them with an alternate earth idea I had involving monsters vs superheroes. Ken Hite did this first in the masterful Adventures in Darkness with a Lovecraftian/Golden Age hybrid . I wanted to do it with Dracula.

There are an amazing amount of Golden Age heroes in the public domain. So I had the supers When to set it was important--I wanted the setting post WWII because Nazis pretty much overwhelm any supernatural evil. The monsters would be a mix of monsters, murderers, and mythology. Finally I decided the year: 1948, the year that Abbott and Costello Meet Frankenstein was released, when the Universal Monsters became the butt of jokes.

I probably will never run or stat this, but I had to share the base concept. Enjoy. 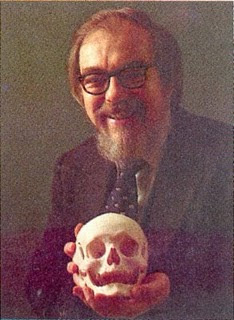 Play a game. Create something. Enjoy life.
Do it for Gary...
Posted by Mike David Jr. at 3:24 PM No comments: