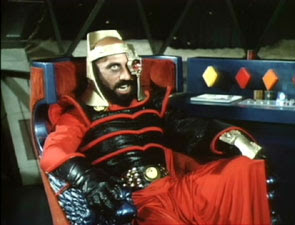 From Jason of Star Command. Why? Because Sid Haig is awesome.
Posted by Mike David Jr. at 5:46 PM 1 comment: 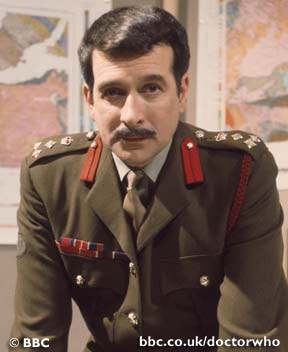 Nicholas Courtney, the portrayer of Brigadier Alistair Lethbridge-Stewart on Doctor Who, died yesterday. I've seen Nick in other movies and TV program, but the show I'll always remember him on is Doctor Who.
I always liked the Brigadier, who I was introduced to in the Tom Baker and Jon Pertwee stories I watched growing up in 1980s Wisconsin. With his no-nonsense demeanor and dry sense of humor, the Brigadier battled Daleks, Cybermen, Autons, and a vast array of foes. He could be seen fearlessly firing a vast array of guns at aliens, and was not afraid to breakout the backhand when he had to.
Here's a little Brigadier to enjoy. RIP Nick.

Labels: Doctor Who, remembrance, You Tube

Art from Lords of Creation

It was a mild snow day (of course, on a day I was off) today in Milwaukee. So I had some time to take my copy of Lords of Creation and scan some of the artwork by Dave Billman from Tom Moldvay's unsung classic. Enjoy. 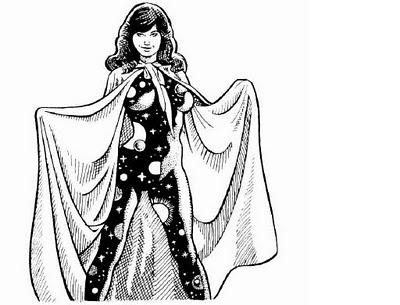 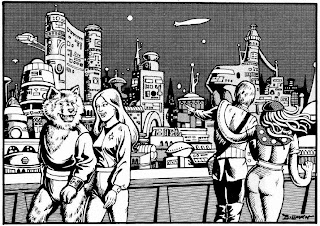 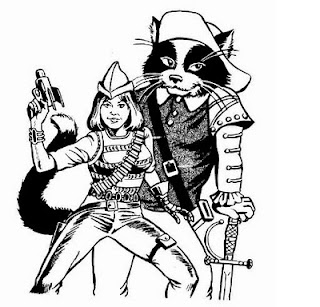 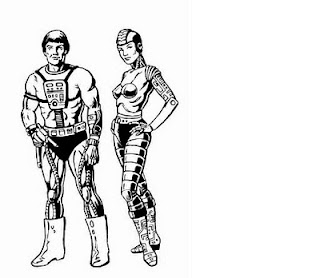 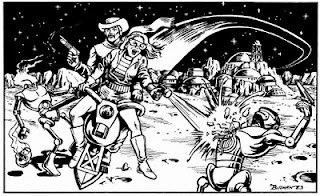 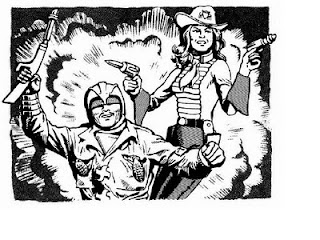 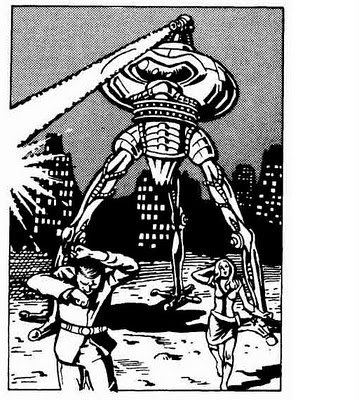 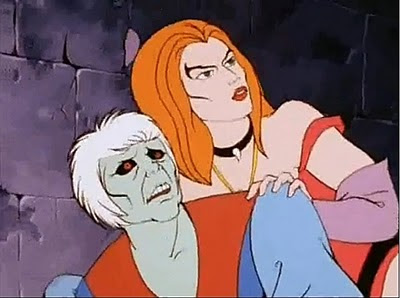 For Filmation Friday this week I give you a Season One He-Man and the Masters of the Universe episode "The Sleepers Awaken". With Skeletor and his minions nowhere in sight, Adam and Teela hunt for horses near a ruined castle with a dark legend. Two hundred years before, Lord Tyran and Lady Valtera used dark magic to draw on the power of the forest around them. When the trees were all absorbed, the pair entered an enchanted slumber to await a time when the forest would revive. In the space of twenty minutes we get a gothic tale of resurrection, dark powers, and redemption. Oh yeah, and a lesson. 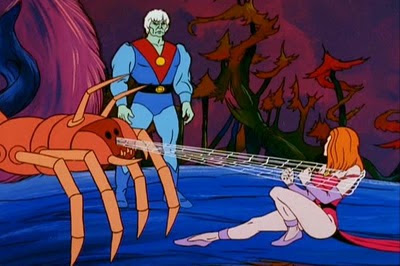 One of the things I love about Filmation is that many times the one shot characters in a series are often very striking. Note the withered appearance of Lord Tyran because he drew too much on dark magics. Another interesting thing to watch in this episode is the treatment of drawing magical power from trees and plants. If you were always curious what Defiler Magic from Dark Sun looks like outside of the desert, "The Sleepers Awaken" can give you some ideas.

Labels: Filmation Friday, Masters of the Universe, You Tube

Happy Valentine's Day to one and all. Enjoy a little Nick and Nora Charles from the classic Thin Man movies.

Some bits from the Filmation Star Trek. Lts. M'ress and Arex, a Kzinti, and the infamous life support belts. 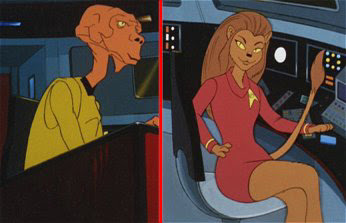 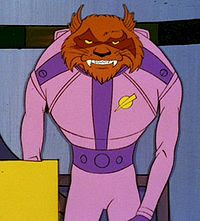 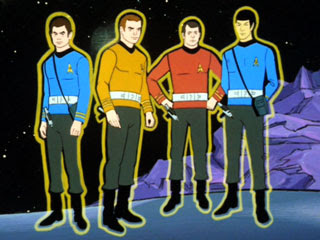 Rutger Hauer in Hobo With A Shotgun (NSFW) 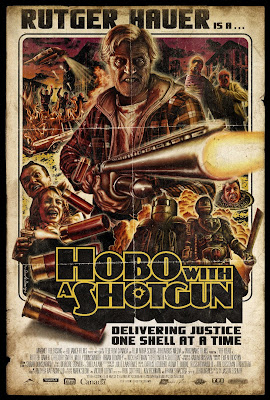 Here's the new trailer for Hobo With A Shotgun, based off the SXSW award winning fake trailer of the same name. And yes, old Roy Batty himself, Rutger Hauer is playing the Hobo. This looks like a lot of fun. Be careful watching this at work, though. It's really, really bloody and full of Grindhouse goodness!

After a busy couple of weeks, it's time for more meaty fare for the Amazing RPG Fun Pad. Submitted for your approval, here are two more Risus characters for a modern-era “weird” campaign. 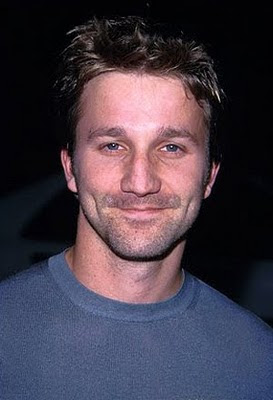 Reginald Blake (Reggie to his friends) is an incredibly rich but absent-minded paranormal investigator. When he is absorbed into a 13th century text about the Slivonian Vampire Dynasty he can rattle off facts and figures with blinking. In the real world, Reggie had been known to forget to pay the electric bill or try to water his car. If he had his choice, Reggie would prefer to stay in his mansion and research the occult and the Fortean, corresponding to clients via phone and Internet. But Sonia, his older sister and best friend, insisted on hiring someone to join him. At first he was cool to the “intruder”, but Alyson Ford won him over.
His reputation leads outside agencies to call upon his services in a variety of cases. To this end he travels the world with his aide Alyson, fighting the strange and the bizarre. These investigations, and the influences of Sonia and Alyson, have opened Reggie to a world he ignored for years. His natural charisma often times will smooth over hard feelings he may cause with his forgetfulness. Though not the most social of people, he is becoming to come out his shell. While he leaves the fighting to Alyson most of the time, Reggie has proven to not be a pushover when backed into a corner.
Eccentric Well Known Paranormal Researcher (4)
Amiable Charmer Who Doesn’t Realize His Own Gift (3)
Wealthy Man Who Can Afford This (3)
Surprisingly Effective Improvisational Brawler [1]


Hook: Absent Minded Professor: While Reggie is an expert in the Paranormal, his mind can wander when confronted with most things outside of his field. This can sometimes lead to interesting situations. 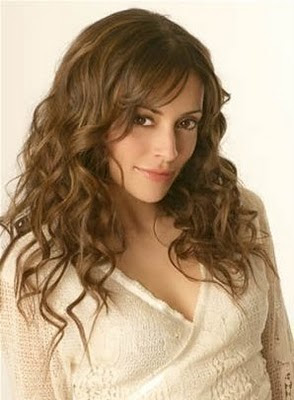 A former corporate security agent, Alyson Ford parted ways with her former employers when the CEO’s son got a little to “hands-on” for her taste. She beat him within an inch of his life. After a nice financial settlement to prevent a lawsuit, she settled down for a long vacation. She was on the phone with her travel agent when Sonia Blake, an old high school friend called her. Sonia needed an aide for her eccentric brother Reginald. Expenses and lodging would be provided for her. She said yes, and joined Reggie in his paranormal investigations.

Tough, cynical and beautiful, Alyson is a dangerous woman to cross. She acts as a safeguard against some of Reggie’s more awkward interactions with people. Part of her is fond of Reggie because he treats Alyson as a person, the other part is driven to distraction by his eccentricities. Alyson is trained in the martial arts and marksmanship. But there is another side to Alyson, and it goes back to her childhood.
Alyson was abducted for an arcane ritual on her seventh birthday. She was meant to be the vessel for a beast spirit, which her abductors hoped to use as enforcers and assassins. The spirit that was bound to Alyson grew fond of her fighting spirit, and the bonded far beyond what their captors had imagined. Alyson and her “sister” Ally (what Alyson calls the spirit) escaped their kidnappers causing much damage in this process. Alyson shares many of the abilities of her beast spirit (a feline spirit) and uses them. These abilities include increased strength and stamina, claws, and running. Ally can take control of Alyson in dangerous situations.
Seductive and Deadly Former Corporate Security Agent (4)
Feline Spirit Host (3)
Cynical Fast Talking Former Street Kid (3)
Sculptress Who Dabbles in a Little Painting (2)

Hook: Sister Takes Control. When Alyson is in danger, Ally will take control of her body. Ally manifests more bestial features than Alyson does, and is much more primal in her actions. When Ally is in control, replace the dice in Cynical Fast Talking Former Street Kid (3) and Sculptress Who Dabbles in a Little Painting (2) with Protector of Her Pride (3) and raise Feline Spirit Host to (5). Ally will protect anyone Alyson is protecting, and considers Sonia and especially Reggie as “hers”. 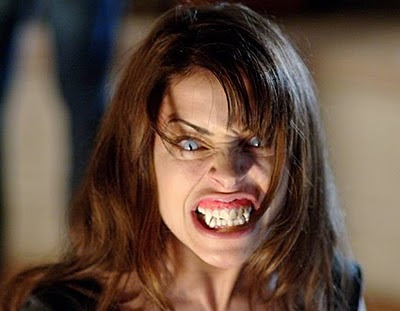 When Ally is in control
Posted by Mike David Jr. at 4:10 PM No comments: 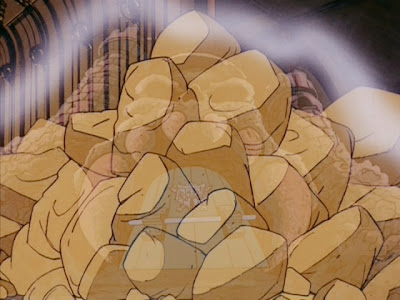 From the He-Man episode "The Dragon Invasion". The Power of Greyskull is that badass.
Posted by Mike David Jr. at 9:49 PM No comments: