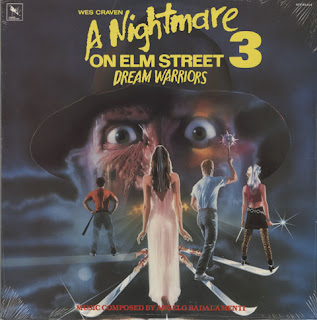 Here’s a continuation of some notes on a Dream Warriors RPG. The first part is here.

An RPG spun off from A Nightmare on Elm Street 3: Dream Warriors would need to have a more expansive world to game in than the movies provide. Of course, an RPG would have to determine if the sequels would affect the setting, but that is beyond this discussion. For now we are spinning off from Dream Warriors.

Most of the action of the game will take place in the Dream World. In this game it is the collected Dreamscapes of mankind. Most of the time, the Dreams of mankind play out quickly and fade away. Memories, fantasies and fears all infuse the dreamscapes that most people wander through in their sleep. Powerful minds and traumatic events can scar the Dream World, leaving permanent areas that do not fade. Examples of this are Freddy’s boiler room and the Dream Elm Street itself. When no one is dreaming in a certain area, the Dream World appears to be a warped reflection of the Waking World. 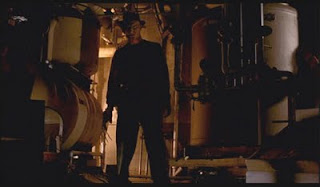 No one knows exactly what lives in the Dream World when no one is dreaming. What is known is that there are creatures born of fear, pain and death. Such beings are called the Nightmares. It is these creatures that the Dream Warriors battle in the shifting dreamscapes of the Dream World. These deadly creatures can come in all manner of shapes, sizes, and abilites, but they have several things in common.

Not every Nightmare is a Stalker like Freddy Krueger. Some Nightmares are Bezerkers, hiding their killings on battlegrounds and killing fields. Others are Possessors who ride an unwilling victim playing deadly games until everyone around them is dead. Some are the personifications of stories told to frighten children, others are men driven beyond the point of madness who find dark power in dreams. All are deadly, and the possibilities are endless.

The Waking World may seem safer to the Dream Warriors, but it has dangers of its own. Most authorities don’t believe stories about a burnt man with razor claws killing your girlfriend. A string of suicides in a small town may lead to therapy and church going, but police wouldn’t expect a Nightmare feed off of the town. Pressing these issue can lead to commitment to an asylum, imprisonment or worse.

Many of the Dream Warriors are considered sick or crazy by societies’ standards. This can affect investigations in the Waking World, as many people won’t talk about that strange dream of a man trying to kill them. And most people will not be happy if you’re found with their son who has just been killed messily in a dream.

On the other hand, those in the Waking World who know about Dream Warriors and Nightmares may not have the PCs best interests at heart. Some in the Government knows about the Nightmares and is trying to capture or control them. Occultists and misguided dabblers tap in the Dream World to unleash “magical beasts” and “demons” into the Waking World. Some Vigilantes consider the Dream Warriors as bad or worse than Nightmares, and hunt them accordingly.

And then there are stories of Dream Warriors who are corrupted by unknown forces, preying on those they were created to protect. These are considered just stories…

Baring the development of a new system for a Dream Warriors game, I would consider some of these systems for roleplaying:

The generic systems: GURPS, Hero, Basic Roleplaying, True20, Savage Worlds, etc all have tools for this type of campaign.

World of Darkness: Give it a Dream Control stat and some cool powers, crib the Spirit rules for Nightmares. Or go classic WoD and steal from Mage, Werewolf, and Wraith.

Over the Edge: Freeform gaming in one of the weirdest settings in RPG History. Dream Warriors would be great in Al Amajra.

Sorcerer (Yes, that Sorcerer.) There is a great thread on the Indie RPGs board about using this game for an A Nightmare on Elm Street-style campaign. I may not agree with all of the pretentious game theory pap in the book, but I really like the system as a modern horror RPG.

Risus, PDQ, QAGS: These rules-lite games share the flexibility of Over the Edge, with their own flavors.

Do you have an email address?

There will be money involved.