I went to ZombieCon X on Sunday. This was a local horror movie convention I heard about by luck. I had a blast, watching movies, talking horror movies and getting some autographs. My camera took a puke, so I don't have any visuals. I got Sid Haig and Dee Wallace's autographs, and both of them were really cool.

There were also some independent film makers there. The movies were good, but the one that intrigues me the most was the New film by local Milwaukee filmmakers Sixth Street Entertainment: 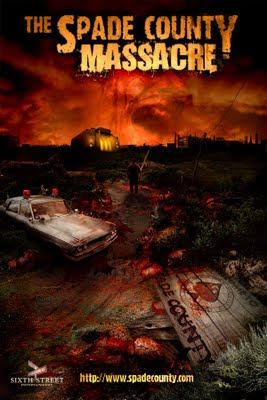 The movie isn't out yet, but check out the trailer:

And check out the Spade County Massacre website. It's full of great background material about the movie.

I love the fact that people are making horror movies in my neck of the woods, and I'll throw some love their way for doing it.
Posted by Mike David Jr. at 2:48 PM