From The Past: My Random GURPS Campaigns

I was, for most of the 90's, I was a big GURPS 3rd Edition fan, and am stil very fond of the rules. I even joined a Amateur Press Alliance dedicated to GURPS called All of the Above and was a member for almost a decade. Fellow AotA member Brett Slocum recently mentioned his nifty GURPS Random Campaign Generator and posted some of his old campaigns on his blog. I decided to post some of the campaign ideas I posted on the Campaign Generator. These are only edited for spelling, grammar and formating. And check out the Generator for a lot of great character and campaign ideas. 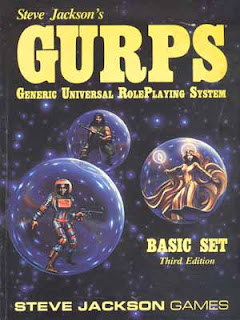 Investigations into an untapped reservoir of Magick leads to the discovery of a race of lizard men who have tapped the powers of the mind to dwell in New Europa. Will they join the Second Compact or fall under the iron fist of Prussia?

Vampiric autoduelists battle in the dark highways of the nations for money, glory and blood.

It gets a little confusing. . .
(Illuminati University, Mage: The Ascension, International Super Teams)

Take two IST Teams on vacation, add a field trip lead by the Dean of C. T. H. U. L. H. U. , stir in a vortex caused by a Sons of Ether experiment gone awry, and an Umbral spirit who calls himself the Jester of Naught who likes to play games. Then it gets really weird. . .

The Wild Card virus ran rampant in a world that was already experiencing the rebirth of magic. The Secret Masters attempt to use the emerging aces and jokers for their own games of conquest after the fatefull words of Oppenheimer.

Ten years after tomorrow, mankind still survives in a crowded world. The creatures of the night stalk the teeming multitudes of people with fang and claw. But Man is not defenseless. Psychics, masters of strange mental powers must join with the increasing numbers of chi-weilding martial artists to fight the oncoming vampiric horde.
Posted by Mike David Jr. at 4:04 PM