The Lich Templars of Ossorio and More...

More thoughts and Encounter Critical inspiration for everyone. No stats but just some inspiration helper for the Journey Master.

The Lich Templars of Ossorio 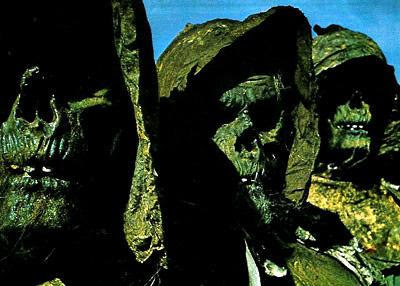 In another post I mentioned the legendary Los Caballeros de la Máscara. These legendary luchador knights have many enemies but none are so great as the infamous Lich Templars of Ossorio.

Tales to frighten children. Dark Legends that even frighten the Vampire Counts of the City of Bloodhaven. Remnants of the legendary Camelon Empire. They are all these, and more.

The origin of the Lich Templars is shrouded in mystery and myth. According to legend, the Templars were once the Golden Templars of Ossorio, pledged in service to the Camelon Empire. They were acclaimed as great warriors and technosorcerors, but their service began to wane. Enemies and jealous rivals accused the Templars of bloody deeds and the worshipping of dark powers. Unfortunately for the Camelon Empire, the tales told were all true.

(Above: A Camelon Cathedral Starship)
Legend states that when the Grandmaster gazed upon the Grail of Galahad, the holy might of the Grail reacted to the corruption of the Templars. For daring to gaze upon the holy relic, the eyes of the Grandmaster and all who were pledged to the order were burned out. The moon and the planet Ossorio were shunted into another dimension. The Grail of Galahad was found floating in the remnants of the Ossorio system.

So the Golden Templars slipped into legend until a century ago. Rumors began of ancient Camelon Cathedral ships plying the space ways once again. Reports from the outlying colonies of varying stellar empires cane back of silent desiccated knights destroying temples and drinking blood. Then the truth was revealed: Ossorio had returned with its unholy masters. The Templars who return had entered lichdom.

The Lich Templars spread again from Ossorio, but more secretively. There are rarely more than 13 Templars on a planet at one time. In the dark of space their Cathedral ships go forth to awaken the Templars buried on other worlds.

In combat they are fierce and relentless opponents. Although lichdom has slowed them, they are resilient and hard to destroy, The Curse of the Grail blinded them, but their other senses have been enhanced by centuries of training and dark magic. Their only constant need is a thirst for blood that they can control, but sometimes burns them into madness.

The Lich Templars have caused destruction and chaos, but their relentless evil has also created powers of good. The Crusade against Camelon forced the Empire to put aside some internal prejudices that extended the life of Camelon. The heroes of many worlds including Vanth have gained honor battling the Lich Templars.

Their greatest enemies were forged when the revived Templars razed the planet. The only survivors, 5 men and 2 women, swore revenge. These 7 warriors sought the Luchador Kings of Terra to train them for vengeance. They became Los Caballeros de la Máscara, battlers of creatures across the universe.

Lich Templars prefer to work through patsies and lieutenants for most things. To get blood and souls, though, they are definitely hands on. 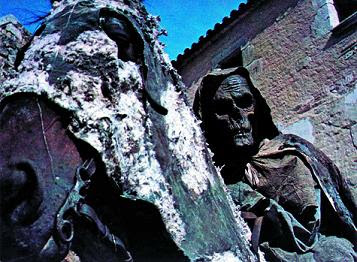 (An excerpt from the Gamers & Gargoyles fanzine #30, from the Gamealot APA #45, 1985)
Re: Superheroes campaign ideas: One of the ideas I want to try is the Vanthian Brigade. This stems from the old Encounter Critical RPG by Battlefield Press. I have all of the books for this game. Battlefield Press was based in Racine, Wisconsin and Racine is only 30 minutes ways from my house. I also have some of the local fan material, all of it good.

Encounter Critical has a great science fantasy/everything and the kitchen sink vibe. The original rulebook comes with 12 races (including some that seem very familiar) and basic mutation rules. The world of Vanth is described in the main rules, various newsletters, and some fan works. The setting is vast—possible origins include mutation, psionics, magic, weird half races, technosorcery, and stranger sources. I could probably whip up some super mutant rules or steal some V&V superpowers. I’m still working on the rules portion of the campaign. Hell, I may use another system entirely, like Marvel Superheroes or something simpler.

The Vanthian Brigade is a JLA/Avengers style superhero team that fights evil across the four corners of Vanth and beyond. Each nation and group has a member in the Brigade. They do not discriminate by race, mutation or belief. Most major nations of the planet allow the Brigade to battle evil on the lands. Even the diabolical Darth Viraxis has sent word for the Brigade to aid his people. Of course, the Godzilla mutant that was summoned was his fault, but his lands needed the protection.

The group has its headquarters in a massive flying castle that circuits that lands of Vanth. The castle is rumored to be the creation of a lost Vulkin/Elfin empire that created one last masterpiece before that Empire fell in a war with Rogue Transchangors. Whatever it’s origin, the Castle Brigade wanders of the skies of Vanth serving as a beacon of hope to the lands below.

The Vanthian Brigade is not the only super team on Vanth. God City has a contingent of the Power Cohort (a galactic order of superheroes), several vigilantes, and super cyborgs. Outside of the city proper is the Cockrum Institute for Phasic Research, a specialty school dealing with strange cases. It is also home to the amazing team of Mutants known of the Phasic Force.

Other countries have their own superhero and villains. Truly, the land of Vanth with superpowers added is truly a strange realm to behold. I may have to start working on this.

Everything else in your zine, RAEBNC.
Posted by Mike David Jr. at 5:13 PM

Love to see what you come up with!

By the Mystic Moons of Muniporr! To the Encounter Mobile!