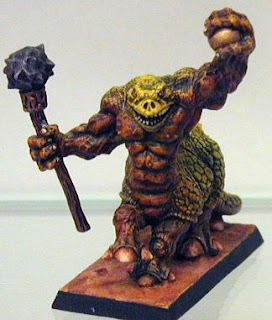 Quick Bio: Traloc is a member of a race of lizard centaurs known as the Xoanon. They are refugees from another dimension that settled in Iconia a century ago. The Xoanon live in small communities scattered throughout Iconia. They are usually a reclusive people, but several of the Xoanon have entered the service of the kingdoms in which they reside. They cannot be changed into goop zombies, so Nekrottus usually imprisons them or forces them to work in one of his pet projects.

Okay, you got me. Traloc is a Zoat. I just had to do that. Once you have a general idea of what you want, character creation is pretty easy. It does have some of the same daunting nature of a “make your own trait” system. It emulates the chosen genre well, and that is always a plus.
Posted by Mike David Jr. at 3:08 PM

Hey, Mike, that's a great character. Of course, I'm a sucker for long-dead Warhammer/Warhammer 40,000 critters (I loves me some Fimirs and Squats), so I'm probably biased. Regardless, it's a great implementation of the race. Nice work!

That's a nice fleshing out of a player race. Very MotU!!